"Needs must" means "If you need to, you do what you must to achieve it."

Well, I suddenly NEEDED to eat some pimiento cheese. But I didn't have any pimientos.

I did, however, have a bottle of sliced olives, wherein the olive slices had lost their pimientos, which were sheltering in place at the bottom of the bottle.

I also had a log of fluorescent orange processed cheese-like substance (known in America as Velveeta, although mine was an off-brand because cheap). If you don't have this stuff, I recommend it. It keeps indefinitely in the pantry before it's opened and, after it's opened, it keeps indefinitely in the refrigerator. If you can't stomach it (Charlie hates it. I love it.), it keeps even longer. 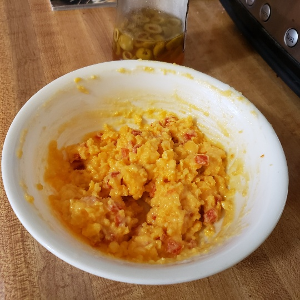 Cheese-like substance, mayonnaise, salt, and olive-y pimientos. I usually put hard-boiled egg in my pimiento cheese, but we were low on eggs and needs must.

I'm posting on my own blog today about another mushroom feast.

No actual hands were harmed in the making of this recipe. It's called a hand pie because you eat it with your hands. Don't take the title of this blog so seriously. Sheesh!

ANYWAY, in better times, I bought some mushrooms and broccoli and then ignored them because there was so much food available and I could just run out and get more whenever I wanted to. Remember those days?

So I decided I'd better use them up.

I had some leftover white sauce (milk gravy), but you can make some, since you probably don't have any left over:


Melt butter, stir in an equal amount of flour and cook briefly, add milk and stir well, getting out all lumps. Cook until thickened. 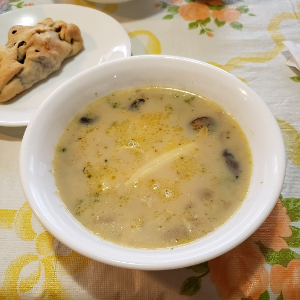 That white strip on top is cheese. I topped the soup with cheese. The thing in the back is my ugly hand pie.

Do you know how to make pie crust?

Take some flour and cut some COLD butter or margarine into it until you have lumps the size of dried peas. Or, if you don't know what size dried peas or, until you have flour with lots of little lumps in it. Add icy-cold water and stir gently until you have a dough that sticks together and only sticks to your hands a bitty bit. You want to mess with this as little as possible, so the butter doesn't melt until it cooks.

How much of everything? I used a cup of flour to make two hand pies.

Divide the crust into as many pies as you want and roll it out on a floured board. Put in your filling (I used mushrooms and onions, but you can use whatever you like), fold it over, and tuck in the ends.

You can make it pretty, but I just wanted to eat it. I totally meant for those holes to be in there, to release the steam. Martha Stewart, I'm not.

Bake it at 400F for about half an hour, checking to make sure it doesn't burn. 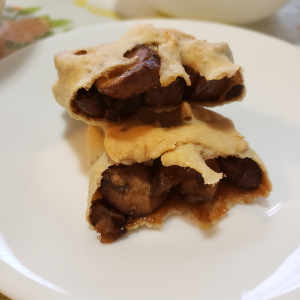 Both dishes were delicious.

I'm posting at my own blog today about wild mushrooms. Yum!

Upon reflection, I should have added egg and bread crumbs to bind them, but I didn't. I just didn't. 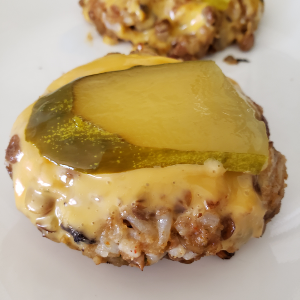 I topped it with smoked paprika, cheese, and a pickle. Alas! it fell apart as I ate it. It was delicious, but not at all burgerish.

I'm posting today at my own blog about a veggie burger that I bought and cooked/presented to utter deliciousness. Yay!

So we had this. 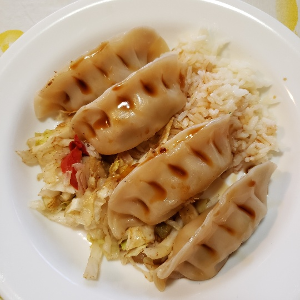 Jasmine rice (we are all about Jasmine rice), shredded cabbage fried with onion and tri-color sweet peppers, and store-bought pork pot-stickers. If I had made the pot-stickers myself, I would have stuffed them with mushrooms and water chestnuts and maybe some chicken.

Maybe your grocery will have another iteration of potstickers, but this is what mine had, so this is what we ate.

I'm posting at my blog today about a meat substitute that's so good, true vegans wouldn't eat it.

I had the tag end of a bag of rice noodles, and decided to use it up. So I stuck them in a bread pan and covered them with boiling water and let them soak for about 20 minutes.

Meanwhile, I boiled some broccoli until it was bright, and cooked a pot of lentils with carrots, celery, and onions.

When that was about done, I pan-toasted the noodles in sesame oil, along with some cashews. The end result was this: 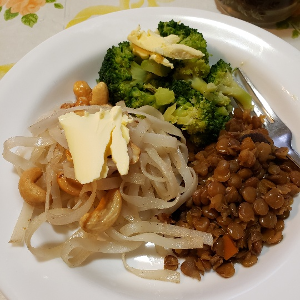 In retrospect, I should have let the vegan margarine melt a little before I took the picture for full foodie voluptuousness, but I was hongry.

I'm posting at my own blog about the same veg with my first successful (I cheated) cod.