If you think Benedictine is a green liqueur, you're not wrong. But it's also a cucumber-flavored sandwich spread invented by Louisville chef and caterer Jenny Benedict back in the day.

We love Benedictine around here.

Oh, and if you think Benedictine spread is a vile, bright green, you've probably only seen it or had it store-bought. Benedictine spread IS green, but its green is pale and delicate. BECAUSE YOU DON'T PUT FOOD COLORING IN IT TO MAKE IT GREEN, DUH. It's green from the cucumbers, duh.

Cut the cucumber in half and scrape out the seeds. Some people peel the cucumber, but I like to leave the peel. Cut the cucumber into chunks or slices and put them into a colander with a bowl underneath. Sprinkle with salt and let stand for a while.

Rinse the cucumbers. Put all the ingredients into a food processor and process until it's as smooth as you like it. We like bits in. If the result isn't spreadable, add a little of that juice that drained off, but remember it'll be salty.

Miss Jenny only used cucumber JUICE, but everybody I know uses cucumbers.

I always end up leaving some of the cucumber's juicy pulp in, so my "spread" generally comes out more like dip, which is also good.

And I made this sammich: 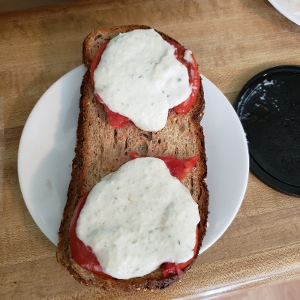 Tomatoes from the farmers market and Benedictine on whole grain bread.

I'm posting today at my own blog about the refrigerator pickles I made with other cucumbers.

I'm a lazy SOB. I would just use TempTee (if you don't know what it is, you're lost!) Cream Cheese, sliced (thin) cucumber, and tomato. By the time you're done with your food processor, my sammich has been devoured.

Yeah, but I would have enough Benedictine for many sandwiches or dip or to share. Plus, I would be preserving my local foodways. :D