I went to the farmers market last Saturday and I bought a buncha tomatoes and I brought them happily home and I dropped them on the basement floor. On the bright side, they stayed in the bag. They did, however, crack, and one of them was flat-dab squashed.

So I did the only thing I could do: made sammiches with the cracked ones and put the squashed one into soup. 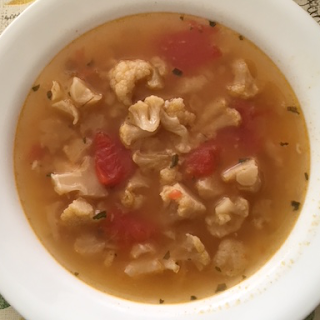 So this is cauliflower, a peeled, chopped (squashed) tomato, veg bouillon, and Italian seasoning. I believe I unveganated it by topping it with a little shredded cheese, but that was unnecessary.

I'm posting at my own blog today about a very UNvegan dish: ribs. [NOTE: Apologies to anyone who tried to follow this link between 9/21-9/26. My website was down.]

Oldest Grandson has joined the Navy and has been spending some time with us before he goes. He asked for potato soup, so I made some.

At the same time, Charlie found a recipe for potato soup that was very different from mine and suggested I try it, so I did.

It isn't really pretty damn ghastly, but we all agreed that we like mine better. The one I made comes from the Electric Consumer magazine and is called German Heritage Cheesy Potato Soup. Follow the link to the recipe. It looks like this: 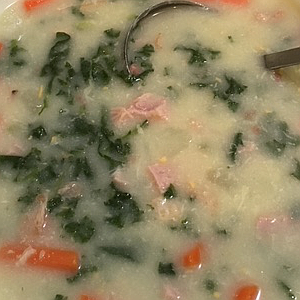 My potato soup is NOT vegan, but it could be, and it IS vegetarian and gluten-free. You may be sure I'll make it before Oldest Grandson leaves.

Mash the potatoes a little, leaving some chunks.

Add milk and margarine (or butter) and bring back to heat, being careful not to boil it. Add salt to taste.

I'm posting at my own blog today about French Toast.

Homemade sauce makes these pork chops from Taste of Home memorable, and cooking them on the grill makes them quick and easy.

Place chops on an oiled grill over medium heat. Grill, covered, until a thermometer reads 145°, 5-6 minutes per side, brushing top with remaining sauce after turning. Let stand 5 minutes before serving.

Serve with reserved sauce.
Posted by Gayle at 1:00 AM No comments:

Our hick town grocery started stock more vegan stuff. More as in some. So, since we're eating less meat, I bought some to try.

I got some Beyond Meat beyond chicken grilled strips and some gardein meatless meatballs.

The chicken was pretty ... wait for it ... foul. Could be worse, but I've had much better. We could get used to it. It would have been better if we had cut it into cubes.

The meatballs were also not so great. 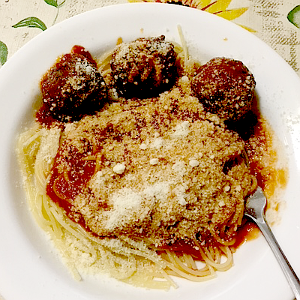 We had them another day, cut into pieces and on a pizza, and they were pretty good. So, a pretty lukewarm review, actually. Sorry.

I'm posting at my own blog today about a chicken curry I made with actual chicken.

The name of this recipe says it all. Chili is the perfect meal when it comes to one-pot
cooking. Simple ingredients combine to quickly satisfy even the heartiest appetite, and chili is one of those healthy meals the whole family will enjoy. This recipe comes from Food Network's Ree Drummond. (Click the link to watch a video of this dish being prepared.)

Place the ground beef in a large pot and throw in the garlic. Cook over medium heat until browned. Drain off the excess fat, and then pour in the tomato sauce, chili powder, cumin, oregano, salt and cayenne. Stir together well, cover, and then reduce the heat to low. Simmer for 1 hour, stirring occasionally. If the mixture becomes overly dry, add 1/2 cup water at a time as needed.

After an hour, place the masa harina in a small bowl. Add 1/2 cup water and stir together with a fork. Dump the masa mixture into the chili. Stir together well, and then taste and adjust the seasonings. Add more masa paste and/or water to get the chili to your preferred consistency, or to add more corn flavor. Add the beans and simmer for 10 minutes. Serve with shredded Cheddar, chopped onions, tortilla chips and lime wedges.

2011 Ree Drummond, All Rights Reserved
Posted by Gayle at 1:00 AM No comments:

Charlie often makes breakfast for us while I work. His range isn't wide (eggs), but it's always good. Here's what he made us the other day: 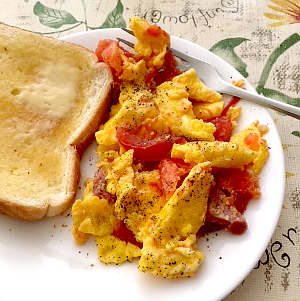 Yeah, this one was a little weird, but not bad. Very good, once you got used to it.

I'm posting today at my own blog about another weird but delicious dish I had at a restaurant.