This Tomato and Goat-Cheese Salad with Basil Vinaigrette recipe is from Martha Stewart, so it has to be a good thing...right? Click on the link for more information.

In a blender, combine basil, oil, vinegar, and 1 tablespoon water. Blend until smooth, 2 to 3 minutes. Season vinaigrette with salt and pepper.

With dental floss or a warm knife (wiped clean after each slice), thinly slice cheese. Arrange tomatoes and goat cheese on a serving plate; drizzle with dressing to taste. Serve garnished with basil leaves.
Posted by Gayle at 1:00 AM No comments:

What the Heck is This?

My friend Jane and I were talking about saucers and cup plates, as the barista slopped the coffee out of Jane's cup into her saucer. Jane remarked that people used to "saucer their tea" or coffee, pouring from the cup into the saucer so the liquid would cool faster. We each remembered relatives who did that, and we each knew it was an old custom, reaching back at least as far as the Regency Romances we used to (and sometimes still) read.

Then Jane, as she so often does, added another trivia bullet to my Jeopardy arsenal: She said that place settings also had a cup plate, so you could put your cup down without leaving a mess while you drank from the saucer.

Then I thought: Is that what this little dish is? 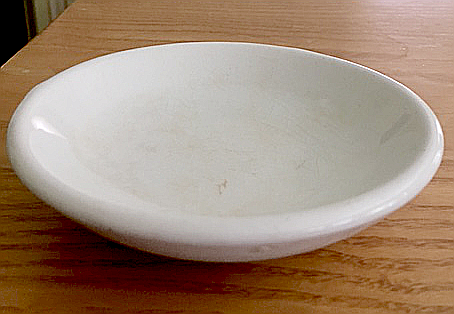 I picked up about four of these little things when Mom's church cleaned out their kitchen cabinets. I use them for tiny salads, to hold small quantities of prepped ingredients, for hard-boiled eggs, for fruit -- small bits of lots of things. They are, as my grandpa used to say and we all say in his honor, handy little gadgets.

After talking to Jane, I thought they might be cup plates, but my research on cup plates shows them to be made of glass, so I think they're something else. Butter dishes?

Any guesses or, preferably, positive identification?

Why is black rice "forbidden"? Because in ancient China, the grain was served only to the Emperor. Black rice is called a super food because it's loaded with the antioxidant anthocyanin. If you don't have any black rice available, feel free to substitute white or brown rice in this Black Forbidden Rice with Shrimp, Peaches, and Snap Peas recipe from Health. Click the link for further information.

1. In medium saucepan, bring rice, water, ginger, and teaspoon salt to a boil; reduce heat, cover, and simmer until tender (30 minutes). Remove from heat; let stand 5 minutes. Fluff with fork and transfer to a large bowl.

4. In a medium bowl, whisk together vinegar, remaining 3 tablespoons oil, honey, and soy sauce until smooth; pour dressing over rice mixture, add shrimp, and toss.
Posted by Gayle at 1:00 AM No comments:

In the throes of the Russia investigation, my fellow old-timers will understand why I'm hesitant to post about anything pink. Nevertheless, I hereby step onto the wild side.


It's nearly summer here in the Midwestern USA, and thoughts turn to refreshing drinks. The Harrison County Fair is about to start, and that means lemonade.

My mother asked me what makes pink lemonade pink, and I didn't know, so I found out.

First, although I always associate lemonade with the turn of the 18/19th centuries, it's an ancient drink. Lemons, which originated in the Mediterranean area, were squeezed, diluted with water, sugared and cooled for the upper class, who could afford to bring ice down from the mountains.

By the 17th century, lemonade had made its way to Europe, where it was a popular street vendor product.

Lemonade came to the USA with European settlers. Where lemons couldn't be had, lemonade could be made with lemon syrup, which could be imported. The temperance movement, during the Victorian era, made lemonade the genteel drink of choice, and it was featured at the 1904 St. Louis Exposition.

In 1872 or 1873, a 15-year-old boy who had run away from home to join the circus, Henry E. Allott, dropped some cinnamon candies into the lemonade he was mixing. The pink lemonade outsold the regular, and has been a staple of the circus concession stand ever since. Red fruit juice is sometimes added by home cooks to get the color, but cinnamon drops originally made the yellow drink pink.

So now we all know.

This Blackberry Lime Cream Puffs recipe is from CountryLiving. Click the link to learn more about the recipe's contributor, see the finished product, and more.

Whisk cream cheese, sugar, lime zest, vanilla, salt, and 3/4 cup berries on medium speed with a mixer until creamy and berries are broken down, 1 minute. Increase speed to medium-high, add cream, and beat until whipped, about 1 minute. Transfer to a pastry bag fitted with a medium-sized pastry tip or zip-top bag. Chill 2 hours or up to 1 day.

Snip a hole in the corner of the zip-top bag, if using. Split profiteroles and pipe blackberry filling on bottom halves, dividing evenly. Top with remaining 1 3/4 cups blackberries and lime zest. Sandwich with profiterole tops. Garnish with confectioners’ sugar. Serve immediately.
Posted by Gayle at 1:00 AM 1 comment:

Today's grocery day, so we cleaned out the refrigerator. That usually means 1) soup or 2) stir fry or 3) smorgasbord. This time, it was stir-fry. 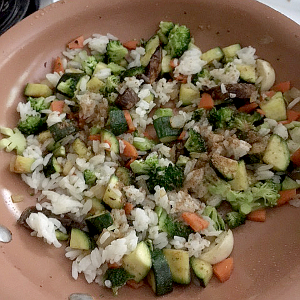 That's onion, garlic cloves, the last bits of raw broccoli and carrot from a crudités plate, a couple of dry-ish mushrooms, a small, sad zucchini we got at the farmer's market because we felt sorry for it, and leftover rice. Fried it in sesame oil and sprinkled it with Five Spice Powder and soy sauce. I topped mine with Pad Thai sauce, but Charlie didn't.

After I put it on the table, I thought, "Oh! I should have put some cashews in!" So we sprinkled cashews on top and that was great.

This Glazed Wings With Butter Lettuce Salad recipe is from RealSimple. Click the link for nutritional information, tips, reviews, and yield.

Heat grill to medium-low. In a large bowl, combine the preserves, vinegar, ginger, cayenne, and ¾ teaspoon salt. Set aside ¼ cup of the mixture.

Add the chicken wings to the bowl and toss to coat.
Grill chicken, covered, turning occasionally, until cooked through, 25 to 30 minutes, basting with reserved mixture in the last 10 minutes of cooking.
Meanwhile, in a small bowl, whisk together the oil, pesto, and lemon juice.
Divide the lettuce among plates and drizzle with the pesto vinaigrette. Serve with the chicken wings.
Posted by Gayle at 1:00 AM No comments:

I made a dish for a cookout, which was a disappointment. The dish, not the cookout. It was potatoes and flat-leaf kale, boiled together and seasoned with salt and vegan margarine. Okay, all you non-vegan/vegetarians, I don't wanna hear it. Most vegan/vegetarian food is goo-ood, but this was kind of blah.

Part of it is that flat-leaf kale doesn't have any body to it, and seems (to me) to be milder in flavor than curly kale. I think pepper would have helped, or replacing the salt with some zesty Mrs. Dash, but Charlie doesn't like pepper and spice, so that was out.

ANYWAY, I had some left.

Since Charlie and I aren't vegetarian, we have some bacon, and I chopped some of that and fried it. When that was nearly done, I added the potatoes and kale and browned them. Meanwhile, I beat a few eggs with milk, salt, and marjoram. Poured that over the potatoes/kale/bacon. I covered it until it was set, then flipped it to brown the other side. 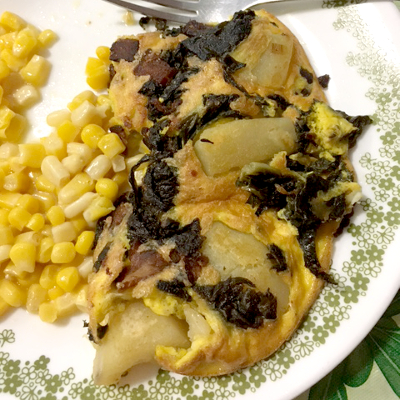 It worked! It was actually delicious!

From now on, though, I'm sticking with the curly kale.

Labels: cooking with leftovers, not kosher, not vegan, not vegetarian

The So Simple Cowboy Caviar recipe comes from Food.com. Visit the page for information about the contributor and for reviews, photos, nutrition facts, and tips.

In small saucepan, combine oil, sugar and vinegar.
Heat and boil 1 minute and then cool completely.
In large bowl, combine beans, peas, corn, peppers and onions.
Pour vinegar mixture over bean/pepper mixture and mix to thoroughly coat.
Cover and marinate overnight.
Drain for 2-3 hours before serving.
Posted by Gayle at 1:00 AM No comments: