Looting and Ravaging from Halloween Decor 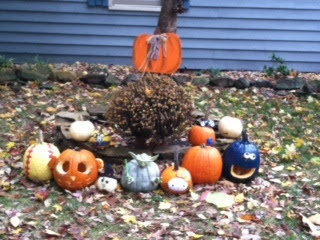 Obviously, just one pumpkin will not suffice for the Hall clan. I love this year's display. We have run into one small issue. The Cookie Monster pumpkin did have cookies coming out of his mouth; and the owl did have lots of sunflower seeds glued on. What happens to cookies and sunflower seeds when you live in the woods? Well, I suspect some squirrels and birds have been feasting on cookies and sunflower seeds. Never thought our display would feed the wildlife!
Posted by Lisa Hall at 10:33 AM No comments:

Kale Soup FTW #Vegan Or Not

Kale soup is SO GOOD, and very versatile. It doesn't even have to be vegan, if you don't want it to be.

Here's the version we had the other night. 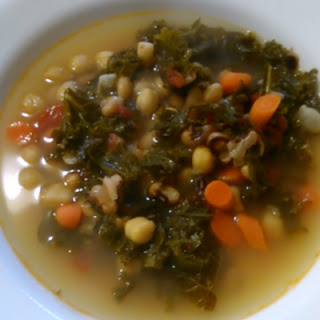 That's chickpeas, black-eyed peas, carrots, and (surprise!) kale in a Not-Chick'n broth. I put in some onion powder, too, though onions would be nicer. Ham or kielbasa would make a good meat addition. If I were serving this in mixed company, I would cook the ham/sausage in a separate pan and serve it on the side to be added at the table.

Little Debbie to the Rescue! 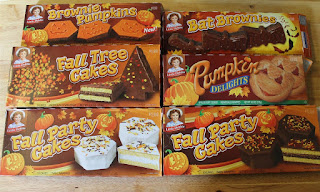 I am organizing this years' TrunkrTreat at my church. So, I must cheaply decorate a whole lotta tables. Dollar plastic tablecloths in orange and black will be on every table. Spread down the center of each table will be Little Debbie Halloween cakes. They are cute, cheap and will allow everyone to take home a little parting gift!
Posted by Lisa Hall at 11:28 AM No comments:

There were more than two tomatoes, actually.

We plan a garden, see. The garden grows. Charlie complains that it isn't producing enough to matter, he's tired of looking at the plants, and it's time to clean up. Next thing I know, the plants are on the compost heap.

This time, we scrounged the last green tomatoes from the poor little vines. 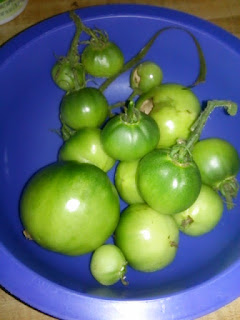 I'll post what I did with the smallest ones on my blog tomorrow.

I sliced the larger ones and made The Queen of Foods, Fried Green Tomatoes.

Every cook has her own notions of how to make this. I slice mine thin, soak them in salt water, dredge them in seasoned flour, and fry them in as little grease as possible until crisp and brown on both sides. The tomatoes, I mean, not me. 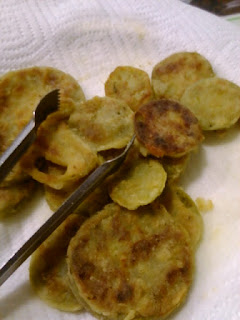 This is absolutely my favorite thing to eat in the whole wide world. The lack of them makes the winter bearable, because I can look forward to having them when summer rolls 'round again.

I know that doesn't make any sense, but that's the way I sees it.

Melt butter in a (10-inch) oven safe skillet over medium-high heat. Add chicken and sprinkle with salt and pepper. Cook until chicken is browned, about 2 minutes each side.

Drop biscuits by the rounded tablespoon full on top of pot pie. Place skillet on cookie sheet and then slide into the oven. Bake for 10-12 minutes, until biscuits are golden brown. 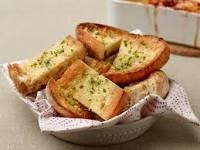 I often find myself with leftover garlic bread. This is not a bad thing; because leftover garlic bread makes outstanding croutons. Just cut the bread into cubes and toast on a 350 degree over for about 10 minutes. Since this last loaf of garlic bread I made also had Parmesan cheese on it, I'm thinking the croutons will have a bit of a Caesar salad flair.
Posted by Lisa Hall at 7:59 AM No comments:

Charlie and I both grew up on this kind of food, and we love it. 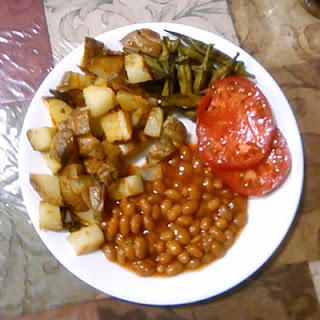 Okay, I tell a lie. Charlie grew up on this kind of food. I grew up refusing to eat anything but meat and taters unless forced to do otherwise. But we both love this now.

Miss meat? I'll tell you the truth: sometimes I do. But this was not that day.

The soup is made from leftover baked potatoes (or you can bake your potatoes in the microwave). Below is the recipe, but visit the blog for more information and for additional yummy recipes.

Whisk together and slowly pour in chicken stock. Continue whisking and add sour cream and cream cheese. Whisk until mixture comes together.

Slice potatoes in half and scoop out the insides of the potato, add to pot.

Smash potatoes into chunks using a potato masher or wooden spoon, until desired consistency is reached. I like my soup kind of chunky. Add sharp cheddar cheese, salt and pepper. Stir until cheese is melted.

So I went into the kitchen and found that Charlie had come up with this off-the-cuff solution. 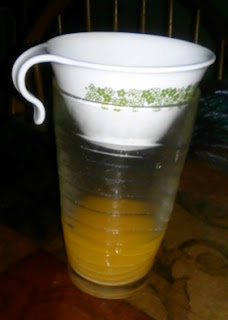 Labels: man in the kitchen 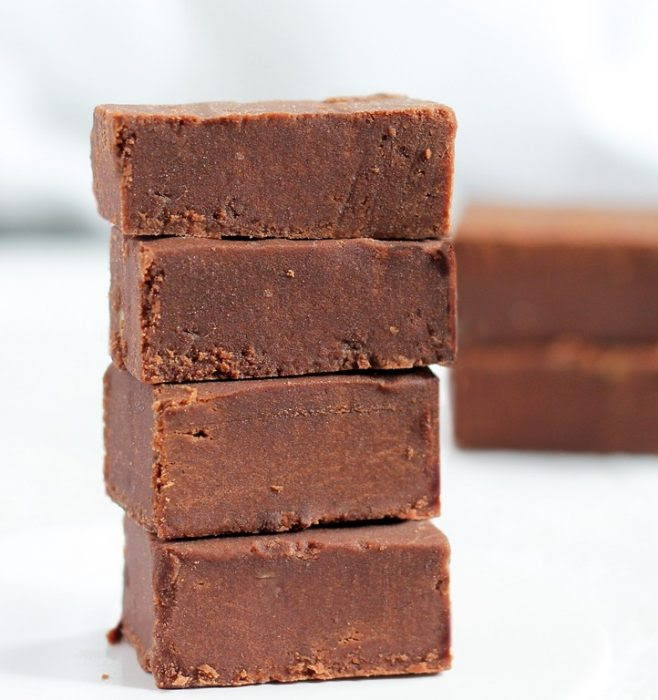 This recipe blogger had me at "no fake sugar." The recipe comes from Chocolate Covered Katie, and you can get this recipe and others by clicking the link.

Make sure your coconut butter is melted before use. Combine all ingredients in a food processor. Then smooth the fudge into a container or candy molds. (Plastic containers work well, because you can pop the fudge right out.) Place in the fridge for a few hours, or freeze for a few minutes. You can freeze it for longer periods of time; just be sure to thaw at least 15-20 minutes prior to eating.