Charlie doesn't like sticky rice, so we always eat our rice fluffy. But leftover rice gets a bit sticky, in spite of itself. So I decided to see if I could make rice balls or rice cakes or whatever shape I could force them into.

I looked up a recipe. They suggested wrapping the rice fill-in-the-shapes in seaweed. That was never gonna happen. Not a fan. They also suggested poking something into the interior, which I'm always up for. The only thing pokeable I had on hand was cashews, so I used them.

OKAY. I wet my hands and rubbed the palms with salt (as per directions), scooped up a palmful of sticky-ish rice, poked a cashew into it, and formed it into a sort of a hockey puck. Dipped it on both sides into sesame seeds, and fried them in my cast iron skillet in a thin glaze of sesame oil. Flipped them (they fell apart a bit but not entirely). 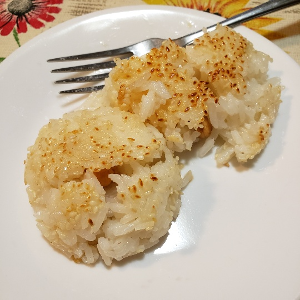 I'm tellin' you what: These babies were DELICIOUS! Imma make some sticky rice sometime, and try them again.

I'm posting at my own blog today about a gnocchi casserole that was also delicious.