Charlie is waxing nostalgic for a Jell-O salad his mother used to make. Fortunately, I know where to go for such things: a church ladies cookbook. I found several in one my own church put out a few years ago, and mixed them up, depending on what ingredients I had in the pantry.

I made it, we ate it, we (and, more importantly, since I made it for him, Charlie) liked it.

When I took a picture of it, though, it came out looking yellow instead of pinky-orange, which it was, so I colored the picture. 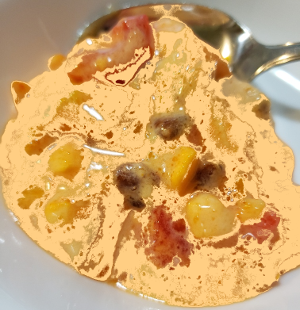 It was a little unset, and I don't know why. Maybe it was the juice, which I drained, but maybe not enough? It was good, anyway.

He asked for something similar for his upcoming birthday. When I complained about how sloppy it turned out, he quoted my grandfather: That don't hurt the eatin' of it.

I'm posting at my own blog today about a dish I made with my home-made sauerkraut. Also disappointing, to a degree.

Both because of the ingredient list- and it's appearance- I am certain this won't make it to my kitchen.

Pretty much the same here!

It actually looked much better. MUCH better. My photo and photo manipulation skillz are ... let us say "weak".