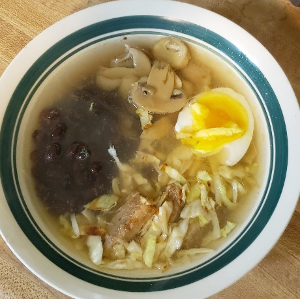 First, I made magic eggs. How you do that is, you bring water to a boil in a pot. Ease an egg (or more than one) into the boiling water. Boil for EXACTLY six-and-a-half (6 1/2) minutes. Take the egg out and plunge it into ice water. The magic is, the egg will be cooked through with a little thick runniness (you know what I mean?) in the center of the yolk.

I fried fake beef and cabbage with sesame oil and five-spice powder. The fake beef is okay fried, but I found it doesn't do well added to liquid. So never again with the fake beef in soup.

I washed out the egg pot and boiled water and Not-Chick'n bouillon.

To serve, put the broth into a bowl. Spoon the different bits into the bowl, so they each show separately. Peel the egg and slice it in two, putting half in each bowl. If you like (and I like), drizzle with hot sauce and/or Hoisin sauce.

I like to make soup this way sometimes, because I find it visually interesting.

Today, I'm posting at my own blog about the easiest and best spaghetti squash ever!

It certainly looks interesting, But, I'm not sure it would be delectable.