I grew up in Louisville, Kentucky, so I'm well aware of the famous Hot Brown. I've even had it at its place of origin, The Brown Hotel (dee-lish-us!). If you want the real thing, go there, or use the recipe at the link I just dropped and make it at home.

The version I made was little like that, but it was still good.

See, I had a memorial celebration of my late mother's life, and I had it catered, which means an awesome lady at church put it together for me. She overestimated the meat intake of Mom's friends and mine, so there was lots of lunch meat left over. I gave most of it away, but carried some turkey and ham home.

When I have both turkey (or chicken) and ham, I make a kinda sorta Hot Brown. 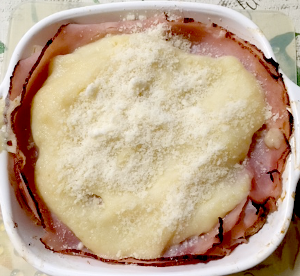 So, toast on the bottom. Then the turkey (or chicken) and the ham. Then white sauce, then cheese. Broil it until it's hot.

A real Hot Brown (as you'll see if you follow the link and read the recipe) has no ham and does have bacon. So maybe I should call this something else, but a Hot My House just sounds stupid.

I'm posting on my own blog today about the stuffed green pepper I made in the Instant Pot. SO GOOD!