Charlie has been buying commercially produced naan bread at the grocery, because they have it on sale nearly every week. In case you don't know what naan is, it's a flatbread, like pita.

He's still on his pizza kick, so we make pizza on naan bread.

We cut a piece in two, because he likes his with almost nothing on it, and I like mine piled with stuff. Here's a picture of mine: 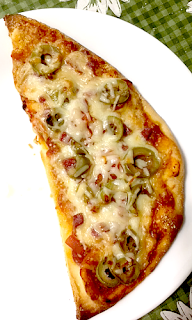 That's olives, chopped summer sausage, and about fifteen cheeses. Ordinarily, I would also put mushrooms and onion on it, but I was too hungry to take the time to slice up the extra ingredients.

I'm posting today at my own blog about a new shipment from Penzeys Spices. Mmmmm.....