Yes, I know it isn't spring anymore, but I fixed this dish in the spring and I'm just getting around to sharing it. When I say "dish," I'm stretching the definition, because it's a plate, actually.

First, I bought these, which makes this dish -- pardon me, plate -- vegetarian, now that I think of it. 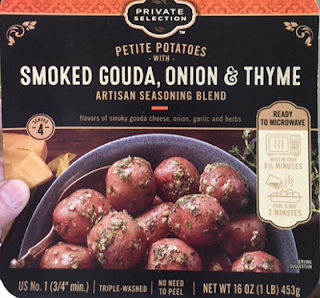 But you could cook your own taters and leave the gouda out. Truth to tell, they weren't all that good. Fresh would be much better.

But we had some fresh asparagus and some cauliflower. 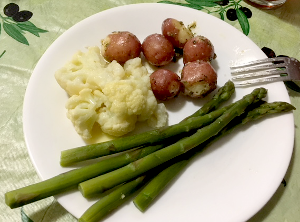 I'm posting today at my blog about what I made with the leftovers.

If you love ice cream cakes, and if you have more patience than I do, visit Smitten Kitchen for a video and step-by-step tutorial for making this yummy dessert. 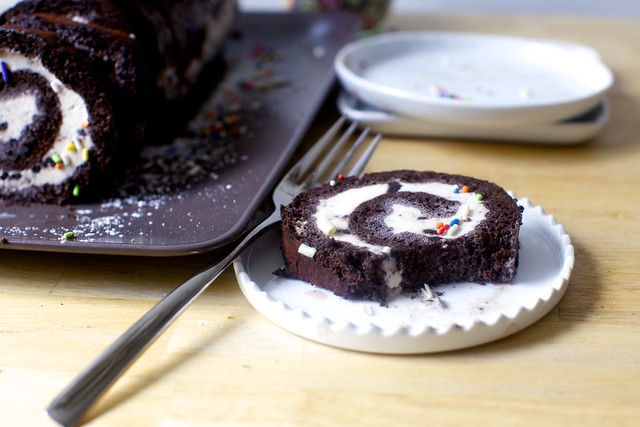 Side by Side Sides

I've been wanting one of those gizmos that make ribbons of veg. I found one in a catalog for next to nothing, so I bought one.

It's a little bitty thing, hand-held, and you just manually twist the veg in it. Works just peachy. The only drawback is that you can't push the whole veg through unless you want to risk auto-cannibalism. But that's okay -- leaving some whole veg, not auto-cannibalism -- because I just saved the tag end to make stir-fry. 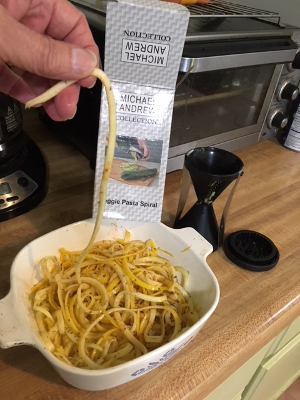 So I put the squoodles in a buttered casserole, tossed with olive oil and Italian seasoning and grated Italian cheeses, and baked at 350F until the water cooked off. Out of one small summer squash, we were left with a couple of mouthfuls each. But good mouthfuls. 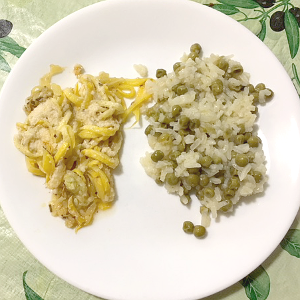 Alongside it, we had Jasmine rice with peas.

You be like, "Where's the meat?" We usually don't do meat. Sometimes, but not usually. We just like veg better, mostly.

I'm posting at my blog today about my first attempt at puff pastry. Pretty much successful, akshully.

Try saying THAT three times fast! 😊 I'm guessing it's easier to make. Either way, check out this recipe from Southern Living.

Click the link above for a video and more in-depth instructions.

How to Make It

Step 1
Cook noodles according to package directions. Drain well, and set aside.

Any time our vegan daughter is going to be at a family gathering, I make a vegan dish so she doesn't have to subsist on raw vegetables. I mean, she generally brings dishes to please others, dishes she can't eat, so it seems only right.

The vegan dishes generally get eaten by everybody, anyway.

I wanted to make a casserole, but I didn't want to heat up the oven. So, in part to test drive my new kitchen gadget, I used my hot air fryer to cook different veg in batches.

First, I put all the veges into a big bag with some olive oil and seasoned salt and smooshed them around. Then I separated them and fired up the hot air fryer.

As each finished, I put it in a vegan-margarine-greased casserole dish.

When all were done, I tossed them to mix them. I warmed up some Tofutti vegan cream cheese and stirred in some capers (I love capers!) and chopped green onions. Baked it to heat all the veg again and to sort of melt the "cream cheese". 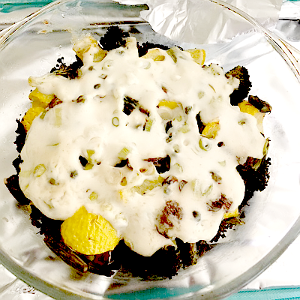 That's yellow squash, broccoli, mushrooms, and potatoes. Any veg would do.

I'm posting at my blog today about something fancy Charlie and I had when our fancy lunch fell through.

One of our favorite restaurants is Luke's Cafe in Abingdon, Virginia. I almost always get the chicken salad. But the other day, I discovered Luke's pimento cheese. Now, the recipe below isn't for Luke's pimento cheese--you'll have to go to Luke's for that--but if, like me, you have a craving flung on you for pimento cheese and can't get to Luke's, this recipe from The Pinning Mama might be just what you need.

(As always, I recommend you check out the link to get all the insights from the blogger, photographs, and serving suggestions.)

16 oz sharp cheddar cheese, grated – Make sure to get sharp or extra sharp cheddar for the best flavor. You will want to use yellow cheese so that you will get the signature color. Also, you can use pre-grated cheese or grate your own. Both work great in this recipe.
8 oz Philadelphia cream cheese– Make sure the cream cheese is softened so that it combines well. If you don’t have time to let it sit out, you can microwave it for a few seconds to soften it up.
1/2 cup mayonnaise- Use real mayonnaise in this recipe for the best results. It won’t have the same taste without it!
4 oz chopped pimentos- Find these in your grocery store near the olives, in the vegetable section near the artichokes, or in the specialty food section. I use the ones that are already diced, but if you can only find whole, just dice it up yourself with a knife or food chopper.
1/2 tsp garlic powder
1/2 tsp dried onion flakes
1/4 tsp salt
1/4 tsp pepper

Combine all ingredients in a mixing bowl. You can just dump them in, in any order. With an electric hand or stand mixer mix the cheese on low to combine and then on high for 1 minute. If you don’t have an electric mixer you can also combine by hand, but it takes a bit of elbow grease. Also if you hand mix, you will probably want to let it chill for a while longer and then mix it up again to really get the flavors combined well.
Place the cheese in an airtight container and refrigerate for at least two hours so the flavors can meld. This stuff will be good as soon as it is mixed but the garlic and onion flavor really distributes well when you let it sit a little bit. You can keep it in the fridge for up to a week, so you can make it in advance for a party or just snack on it all week long.
Serve with crackers, chips, as a sandwich, or on veggies. Most importantly… Enjoy!
Posted by Gayle at 1:00 AM No comments:

Instant Pot Cream of Asparagus/Mushroom Soup #Vegetarian Could be #Vegan

So I got another kitchen gadget, and I'm tellin' you what: This one is not a gadget; it's a wonder!

Everybody's been raving about the Instant Pot, so I found one on eBay for $30 less than in the store, shipping included. Sadly, when it got here, it was without the manual and without the cookbook. I contacted Instant Pot's Customer Service (yes, as radio comedian Fred Allen [no relation] would have said, I have more nerve than a bum tooth).

Instant Pot's Customer Service is great! The manual is online -- free -- and there's a website and app -- also free -- constantly updated with new recipes. There are also a million-billion (slight exaggeration) videos on YouTube.

If you can follow that, you're better than I am.

So here's the pot. The display is telling me that I have to wait two more minutes before releasing the pressure, not that it's two seconds from explosion, the time (as we Galaxy Quest fen know) at which the ABORT EXPLOSION command will take effect. 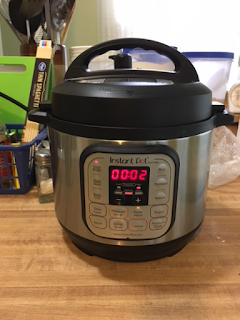 So I used the handy Saute function to saute some onions and mushrooms while I chopped some fresh asparagus (from the store, alas!). Then I put in two cups of water, enough bouillon to flavor three cups of liquid, the asparagus, and some marjoram. When the water was hot, I cancelled the Saute function and engaged the Soup/Broth function, put on the lid (or am I supposed to say "lidded the pot" these days?), and turned the cock from Venting to Sealing.

This is when I was supposed to pour it into a blender, but come on. I just mashed stuff up a bit with the potato masher. I cancelled the Soup/Broth function and re-engaged the Saute function. Mixed flour into a cup of milk and slowly added it, while stirring. That had to cook a little, to get the floury taste out. 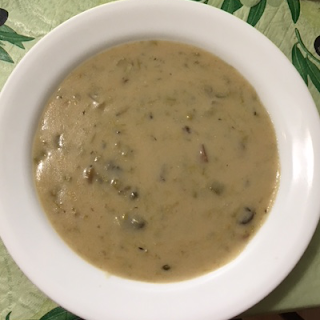 Yes, indeed, it was good!

One of the YouTube videos said not to cook with dairy in the Pot, because the dairy might curdle, but I don't know that from personal experience, 'cause I didn't risk it. And I don't know if non-dairy "milk" would curdle or do something funky. This worked.

And good? This was gooooooooooood! The flavor was so rich and deep, it was almost swoon-worthy. I mean, I like soup okay, but if you offered me the choice of a restaurant steak or this soup, I would choose this soup.

I'm posting today at my own site about the very NON-vegetarian spareribs I made in the Instant Pot to take to the Memorial Day party. But I post something over there every day, so don't be a stranger.

Posted by Marian Allen at 8:42 AM No comments:

The perfect beverage for spring. Combine cold iced tea with fresh berries and citrus to serve during those spring celebrations.

Place tea bags in a heatproof pitcher. In a 4-qt saucepan, heat water to a boil. Pour it into the pitcher and steep tea bags for 10 minutes. Remove tea bags; let cool and refrigerate, covered, until cold, about 1 hour.