My mother always said this was a "secret family recipe." She was a funny lady.

Secret or not, #4 Daughter, the amazing Sara Marian, loves it, and I nearly always make it for her birthday, and often in between times.

Mix the pudding and pour it into the shell. Top with whipped topping. The end.

Some years ago, the whipped topping people made a chocolate version, and I used that, but I haven't seen it for a while. This time, I tried mixing chocolate into the white version, and ended up with s sloppy goop.

But Sara, quoting her late grandfather, said, "That don't hurt the eatin' of it," and dug in as usual. 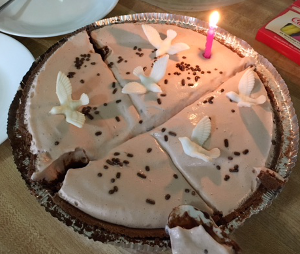 The birds have not been indiscreet: those are chocolate sprinkles.

There are birds on it because long ago, Sara had a birthday cake with birds on it, and wanted to keep them for the next year. So every birthday cake for everybody had and still has the birds on it. When Middle Grandson was wee and went to his first non-family birthday party, they brought out the cake and he asked his mother, "But where are the birds?"

Who cut that cockeyed pie? I did. Why did I cut it cockeyed? I couldn't say. It just happened. I had only had one Guinness.

I'm posting today at my blog about the drink I made for Sara, which she loved. (She's a grownup now.)

What a great story! And the pie looks wonderful. ��