Charlie decided to make some split pea soup this week. He asked me what to put in it, besides split peas and water. I suggested chopped carrots, onion powder, and marjoram. He put those in.

I think you can see where I'm going with this.

I sometimes deliberately put grated nutmeg into peas, so this wasn't too different. Cinnamon isn't sweet, you know; we just associate it with sweet because we usually combine it with sugar, but it's actually a little spicy.

So the soup was far from a failure. I doubt he'll put cinnamon in the soup on purpose next time, but it wasn't bad. Not bad at all. 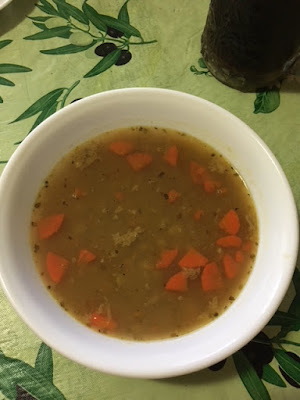 One thing I forgot to tell him was to not salt the split peas until they had cooked a while; salting them at the beginning keeps them from softening up, for some reason. Probably science.

I'm posting today at my blog about a different kind of soup, this one being one that I made.

Labels: man in the kitchen, soup