I've been buying asparagus for the past few weeks, because we haven't had it all winter. I know I could buy it canned or frozen, but it just isn't the same. Mind you, I like canned asparagus, but it's a totally different thing from fresh.

ANYWAY, here's one of our meals. Again, we aren't vegan, but we eat as if we were, more often than not, or at least vegetarians. We just kind of slipped into the habit, somehow.

Now, look at this. As my husband's Aunt Ora Mae used to say, "Now, ain't that perty?" 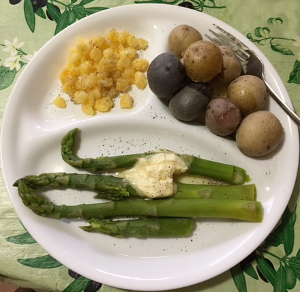 The yellow stuff is hominy from a can. I drain most of the liquid and pan-fry the homs in vegan margarine and seasoned salt.

I cooked the asparagus by putting it into a glass bread pan with salted water and minced garlic, and microwaved it for about 6 minutes or until tender.

Our #1 Daughter brought us a sack of mixed new potatoes, so I made New York Salt Potatoes -- which is just potatoes boiled with a butt-load of salt in the water. It's crazy good!

Sounds like a lot of salt, but we don't add any at the table. I do pepper. Husband doesn't.

I'm posting today at my blog about speargrass sammiches. That's asparagus sandwiches, for those not fluent in my language.