This one is neither vegan nor Kosher, but maybe it could be with some tweaks?

Charlie found a recipe he liked the look of that called for bacon, so we got some from the store that sells Amish-raised meat. That recipe -- Long story.

First, I cut the florets off the broccoli stems (saved the stems for another dish), put the florets into a microwave-safe dish with a little water, covered it, and nuked it until the broccoli was tender. Then I mixed in a can of cream of mushroom soup. 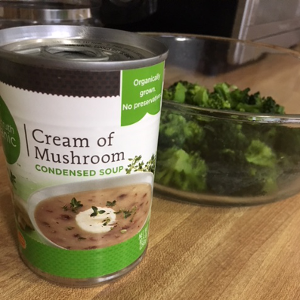 Meanwhile, I chopped and cooked one slice of bacon. When it began to give off grease, I added some mushrooms, onions, garlic, and rosemary. 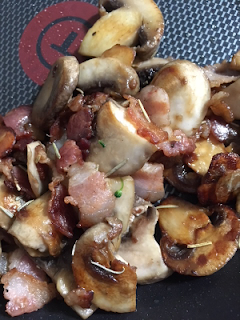 Mix it all up and bake it, and you get this. 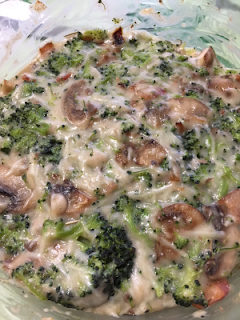 I probably stirred some cheese in there, too -- I usually do.

I'm posting today on my blog about another broccoli/mushroom/cheesy dish, this one without bacon.