A Make-Do Breakfast Casserole -- Could be #Vegetarian

It isn't vegetarian, but it could be.

I had the "goodies" for church last Sunday, and I didn't have enough to make what I had in mind, so I cooked what I had and bought stuff on the way to church to finish it. I brought very little of it home, and got lots of compliments. 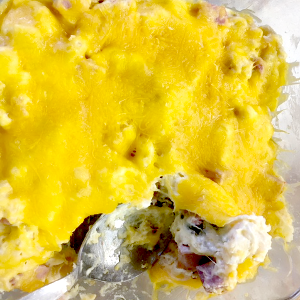 Okay, I started out with small cubed frozen potatoes and frozen pepper/onion mix. Cooked that until it was done and put it in a buttered casserole. At the store, I bought a bag of cubed ham, some sour cream, some cream cheese, and some shredded cheddar cheese.

I mixed in about half of the ham, half of the cheddar, about a half-cup of sour cream, and about a quarter cup of cream cheese. I couldn't find the salt (if it'd been a snake, it would have bit me), so I used Lawry's seasoned salt.

A few minutes in the microwave heated it all up. I topped it with a hella bunch more of the cheddar and heated it until it melted.

It got rave reviews. I brought home the pitiful spoonfuls that were left, and Charlie raved about it, too.

Well, you know the ham left me cold (even though you microwaved it). And, the potatoes did nothing to get me thrilled. But, I never heard of frozen pepper/onions. I guess that's what they sell in Indiana.
I'll stick with my baked french toast concoction for special breakfasts.