Festive #Vegetarian Casserole, Could Be #Vegan

So I went to a party at which we were to each bring a present that cost $10 or less, and played one of those swap-around games, and this is what I ended up with -- the very one I wanted! 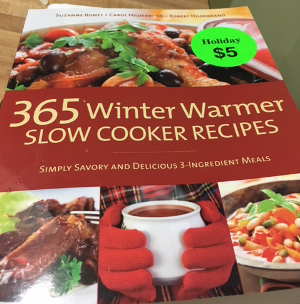 Put the Mexican corn, black beans, and salsa in the slow cooker and stir to combine. Cover and cook on LOW for 3 to 4 hours.

ADD IT IN: Sprinkle 1 cup (115 g) shredded Mexican-blend cheese over the mixture 15 minutes before it's done and continue cooking until the cheese has melted.

--I also mixed up a pot of vegan taco "meat" and stirred it in after the veg had cooked. I did that again for Christmas, plus substituted vegan "cheese" and held the sour cream I topped ours with. 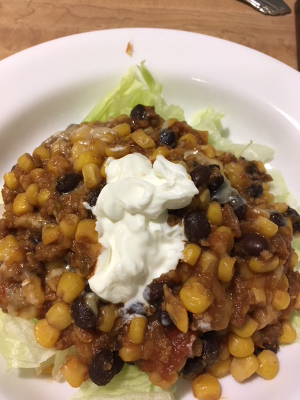 I'd choose quinoa over the salsa. But, I'd also add some tomato bits (chunks cut into smaller pieces).

You mean quinoa over the corn? I know you don't do starches. That WOULD be awesome! And I'm also a big fan of diced or chunked tomatoes. Charlie hates 'em! It's a wonder we can even eat together. lol