He was right, that all the ingredients had blended into one heavenly flavor, but he was also right that there was a little extra something.

I gave up. He pointed to a bit of something. 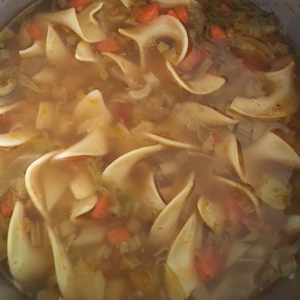 It was a slice of olive!

He said, "I cut up four olives into the soup. And you can taste it!"

I could. It was subtle, but it was a definite addition.

The result was those three little words that mean so much: Keep the recipe!

Looks like I will try adding an olive to my veggie soups.
Thanks for the idea.