So we bought some of these at a farmers market. I think she said they were purple pod peas. I mean, they obviously are purple pod peas, but I think that's what she actually called them. You don't eat the pods. 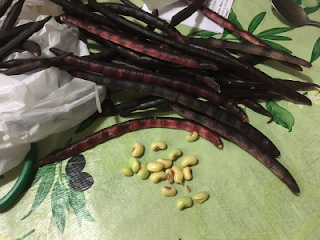 Shelled out, they look like black-eyed peas, don't they? That's how she said to cook 'em, so we did. We boiled them with a little oil and onion, salted the water when they were tender, and ate 'em with cornbread.

They were good -- very like black-eyed peas, as promised.

First syllable is what you have when the air goes out of a tire.

Second syllable is the opposite of "me."

Third syllable is what knights on horseback jousted with.

Not for me, but for my husband. It might have something to do with his colitis, but we won't be having these again, no matter how pretty the pods are.

I expected some purple prose to describe your purple pea dish...