Risotto is SO GOOD! and #vegetarian! 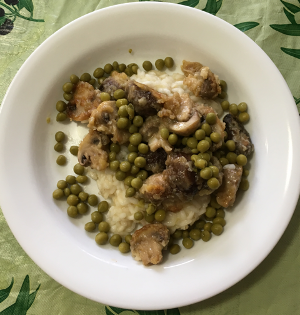 RISOTTO WITH MUSHROOMS AND PEAS
It's a little fussier than I usually cook, but sometimes it soothes me to fuss over cooking. You could leave the cheese out, if you want to go vegan. Add a little ground cashew or some nutritional yeast. Still good.