After a huge day of Black Friday shopping, chances are you don't feel like making a big meal. And, after that huge Thanksgiving dinner yesterday, you probably want something light. Thankfully, you can whip up an easy salad from the ingredients you already have on hand. 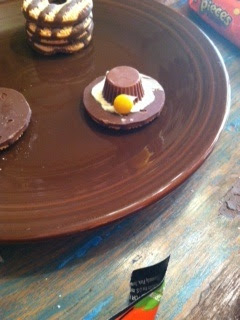 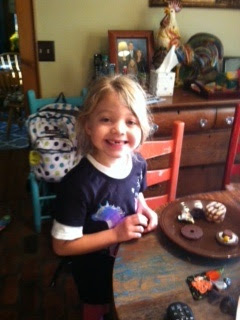 The first day of Thanksgiving Break does not mean the Halls get to sleep in. Calli had a sleepover and an 8:00 a.m. basketball practice. Sky and I are just morning people; so we were up by 7:30. What do you do with a bored 6-year-old at 7:30 on Thanksgiving Eve? I put her to work on an easy project. Pilgrim Hat cookies are so simple, she did it mostly by herself. Here's how you do it: You will need: Fudge Stripe Cookies vanilla frosting (tinted yellow) mini peanut butter cups yellow M&Ms or Reece's Pieces Instructions: Turn cookie upside down. Glue one peanut butter cup with small amount of icing in center of cookies. Using toothpick or wooden skewer, run small amount of icing around peanut butter cup for hat border. Stick yellow candy piece buckle on with small dot of icing. So cute!
Posted by Lisa Hall at 8:32 AM No comments:

These have eggs in them, so they aren't vegan, unless you use an egg substitute. I have some, but I've never tried it, so I can't say how that would turn out. These turned out guuuuuuud. 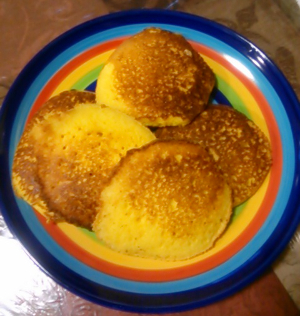 Charlie taught me how to make these. Then he forgot, because I did the cooking after we were married, and I got to teach it back to him. :)

Adjust the amounts of everything to suit your own taste, of course.

Mix everything except the margarine and let it sit a few minutes for the cornmeal to absorb some of the milk. You'll have to stir it up before you cook it. Melt margarine in a large skillet. When the skillet is hot, drop batter by the 1/4 cup into the skillet, probably no more than 4 to a batch. Fry until the bubbles on top pop and the edges are brown. Turn over and finish frying, adding more margarine, if necessary.

Great with what I'm posting about on my own blog tomorrow. :)

Did you hit the after Halloween candy sales and buy more candy corn than you'll ever use? While candy corn is great for decorating desserts all the way through Thanksgiving, you can also use it to make Butterfinger-style candy bars! What? Yep, Butterfingers from candy corn. How awesome is that? Watch the video below to become the next candy rock star.

My first grader will be studying fractions next week. Her teacher is using an awesome method of instruction. She is having parents make pumpkin and pecan pies especially for the lesson. With Thanksgiving being next week, the timing is perfect and delicious! I might have enjoyed math a little more if I had learned fractions this way!
Posted by Lisa Hall at 8:19 AM No comments:

I had the refreshments at a meeting this month. I baked some bread, and I needed something to go with, so I made these.

The pinky-orange one is sweet. You can substitute any preserves or any nuts you like. 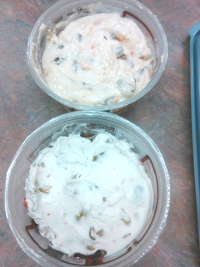 It's insane how nice these are, and how well they go over, to be so quick and easy and relatively cheap.

Good to keep in mind, as we approach the party season.

Okay, so we all know how important gravy is at Thanksgiving. I mean, come on, it's gravy we're talking about! Unfortunately, making the perfect gravy leaves many of us scratching our heads and reaching for that trusty jar of gravy in the pantry.

Michael Symon of The Chew makes it foolproof to not only make an awesome roasted turkey but gravy, too! All with only three ingredients. Thanksgiving just got easier.

Check out the recipe here: http://abc.go.com/shows/the-chew/recipes/campbell-classic-roasted-turkey-pan-gravy
Posted by Gayle at 2:00 AM No comments:

Colcannon -- Or Is It KALEcannon? #Vegan

We love this stuff. It's good, and it's SO EASY and quick! 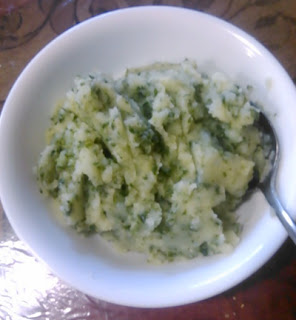 You just pull the leaves off some kale, peel (or not) and cube some potatoes, put it all in a pot and cover it with water, bring it to a boil, turn down the heat and simmer it for 20 minutes. Then mash it. You can mash it a little, leaving chunks, or you can mash it a lot. A little salt, a little pepper, and then you stuff it in your belleh!

You can use cabbage, if you'd rather, and that's good, too, but we had some fresh kale from the farmers' market, so we used kale. Mmmmm.

Fall is in full swing and while you may have enjoyed zucchini and yellow squash during the summer, there are a number of Fall squashes that are just as delicious. Acorn squash is a great option and makes a wonderful side dish. The video below teaches you everything you need to know about roasting an acorn squash, but what do you serve it with?

Acorn squash is a delightful side dish for ham steaks, a sage rubbed pork loin, or even a classic roasted chicken. Think of the flavors you love of the Fall season and combine them with acorn squash to create a Fall inspired meal.

The first time I tried to make a pie crust, I got mad at it and threw it up against the wall. It didn't do the crust -- or the wall -- a bit of good, but it relieved my feelings more than somewhat.

A few nights ago, I made a crust that was, Charlie agrees, pretty darn good. Here are some small and simple things I do differently than I did when I made my first one, and I believe they make a big difference.

So, first, the sugar makes the crust tender instead of tough. Second, the colder the water is, the better. Third, mix all the dry ingredients and then add the shortening, and stir it with a fork until all the flour is incorporated with the shortening, but don't mix it into a paste; you want little lumps of shortening in it. Now, add a couple of tablespoons of the ice water and stir a few times. If the pastry doesn't seem to be holding together, add another tablespoon or so of water and stir another few times. This is kind of tricky, because you want the pastry to hold together but not be wet. You want to mix it, but not to break up those little lumps of shortening.

Now, dust a board with flour and roll out the pastry. Start in the middle and roll it toward the edge, turning it so you can roll it from the middle out to all edges. Carefully pick it up and put it in the pie pan. Work with it as little as possible, and run cold water on your hands if you need to to keep those little shortening lumps from melting while you work it. Cut off the bits that hang off the pie pan's rim, and crimp or do whatever fancy thing to the edge you want to. Or leave it plain; it eats just the same.

NOW, put the crust into the refrigerator to chill before you bake it, or before you fill it and bake it. 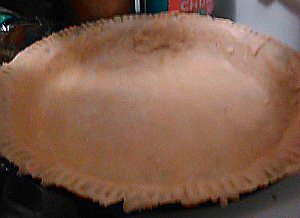 I baked it at 450 for between 5 and 10 minutes. When it started to bubble up, I took it out, poured in the filling, and baked it until the filling was done.

It was crisp, light, and done on the bottom, just the way Charlie and I like it. Not big fans of soggy pie crust.

On my blog tomorrow, I'll talk about what I filled it with.