Charlie made some potato soup the other day, and it was very good. HOWEVER, he likes his soup thin (as he calls it, "brothy," as I call it, "watery") and I like mine thick. When I make potato soup, I make it thick and he thins his with milk. He made his thin, which we both consider turn-about is fair play.

So I stirred some instant potato flakes into mine and added some grated cheese. If we were carnivores, I could have nuked some bacon and crumbled it up in there, too. 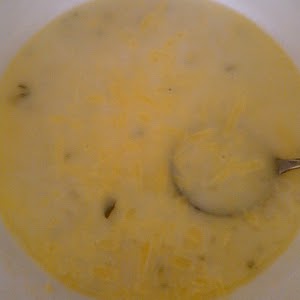 This is the secret to a successful marriage.

Cook the potatoes in the water with parsley. Drain off some of the water if you want the broth richer. Mash them a little, so the broth is lumpy. Add milk. Heat but don't let it boil or scorch.

Hug and be happy.

Labels: man in the kitchen, vegetarian