Thanksgiving, 2014. Our vegan daughter was going to the family pitch-in, so I bought a rice salad packet to make and take. I chose the Southwestern Suddenly Salad with Chipotle Vinaigrette rather than the Parmesan one because, being vegan, she doesn't eat cheese.

I made the salad and then I read the ingredients list. Seriously? Milk products? In vinaigrette?

So she wouldn't be able to eat that.

What could I make at the last minute? 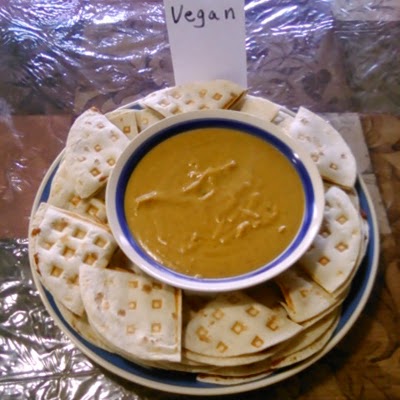 I pan-toasted some mushrooms and mixed them with vegetarian refried beans and some corn-and-black-bean salsa. I put that between flour tortillas and toasted them in the waffle maker, then cut them into fourths and piled them around the edge of a plate.

The un-cheese sauce is a spicy one from The Ultimate Uncheese Cookbook, which I just got and had never used before. It's equal amounts of flour and nutritional yeast, plus spices, water, and a bit of miso.

I labeled it clearly as vegan, as you see, but non-vegans tried it and I had almost none to take home. They put the sauce on the quesadillas, and used it as dip for their raw veg and their chips. Our vegan daughter barely had any to take home with her!