Not a duck. Not a pig. US! Our #2 Daughter has chestnut trees, and she collected a bunch of the nuts and brought them to us.

We cut Xs in the shells and roasted them in the toaster oven at 450F for about 20 minutes. 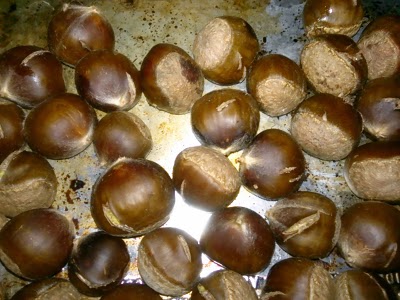 YES, they were good!

We discovered, though, that not even we could gobble up a whole tray of them before they dried out.

So now we just do a few at a time by cutting the shells and putting them in the microwave for 30 seconds! In that last second, at least one of them will pop itself right out of its shell.

They're so good and sweet! If you've never had roast chestnuts (or boiled or microwaved), and you have the chance to have some, DO.

The only drawback is that insects lay eggs in the chestnut blossoms, so sometimes there's a worm inside a nut. It isn't much more appetizing cooked than it would be raw, so be sure to cut your chestnut open before you eat it, just to be sure. Unless, of course, you don't care. In that case, be my guest to just pop that baby in your mouth whole and damn the torpedoes.