We're only mostly vegetarian at our house. One of the un-vegetarian things we eat is fish. Pescatarian, that's called. Just in case you're even, you know, on Jeopardy or something.

ANYWAY, here's what we had for supper. 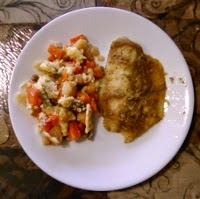 That's tilapia dredged in Italian-seasoned breadcrumbs and fried in vegan margarine about five minutes a side. Then I took the fish out onto plates, mixed a little lemon juice into the margarine, and poured it over the fish.

The veg is Minton's Veggie Casserole, which I call that because a man named David Minton gave me the recipe. It's just a can of mixed vegetables, drained and rinsed, layered in a buttered casserole dish with crumbled crackers, mayonnaise, and cheese, then baked at 350F for about half an hour. It's extra good if you have some water chestnuts to add. Minton put Worcestershire sauce in his, but I'm not madly keen on Worcestershire sauce, so I leave it out.