I've been vilified before for calling what I call chili "chili" and I'll no doubt be vilified again. But that don't make no nevermind to me, as we used to say.

It's been cold and icy and snowy around here, and Charlie and I decided we wanted some chili. He wanted white chili. Okay.

Now, you have to know two things about us:

And that tells you two things upfront about this chili I made:
So while the broken-up SPAGHETTI was cooking, I heated some garlic-infused olive oil in a pot and sauteed some onions, chili powder, and cumin. I stirred in some flour for a tiny bit of thickening. I drained a can of pinto beans (his request) and put them, along with some water and not-chick'n bouillon into the pot and cooked it for about 15 minutes.

Charlie says, "It's bean soup!" I'm like, "You don't want meat or tomatoes or chilis in it; all that leaves is beans!"

So here is our kinda sorta chili, WITH SPAGHETTI, topped with a dollop of salsa and some cheese, also I added some corn to mine (Charlie doesn't like corn off the cob). 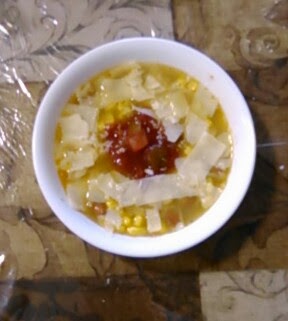 By the way, it was delicious!

My mother came from Kentucky, and she always put spaghetti in her chili. So of course, I do. It's good that way, white or red.

Hooray for the chili-in-spaghettiers! :D

I mean spaghetti-in-chiliers. I'm posting about beer at my blog today,so....