The Pepper Factor and the Carolina Reaper by J.J. Cook

The Pepper Factor
By J.J. Cook
from Playing with Fire
www.jjcook.net


I call it: The Pepper Factor. It's the love of everything with hot peppers in, or on it. I have seen people eat oatmeal with chili peppers, and ice cream with sliced Habaneros. People eat gallons of hot sauce every year, and yearn for the new hottest pepper. 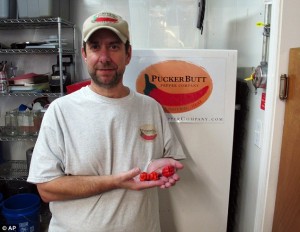 Guinness Book of world Records officially named his pepper - the Carolina Reaper - the hottest pepper in the world last November. It is three-hundred times hotter than a normal jalapeno.
Smokin' Ed has done all this work for his business, the Puckerbutt Pepper Company, and it has raised him to super status in the pepper community. Ed has been on countless talk shows and has had his name splashed across the world in newspapers and TV reports.
http://puckerbuttpeppercompany.com/

It has been a four year search for the next hottest pepper in the world after the Ghost Pepper gave up the spot. But as you can see from this video, it was well worth the wait if you love hot peppers!

"The second book in the Sweet Pepper Fire Brigade series, Playing With Fire. This series is about a small town fire house that needed a helping hand. But when Stella Griffin comes to help out she didn't figure on having a ghostly roommate, the former fire chiefs murder to solve, or the unusual town of Sweet Pepper to entice her to stay. Cook does a fantastic job of drawing the ready in and holding on to them. Playing With Fire is as much about a 40 year old murder as it is about a new one that has just occurred. With two mysteries, a ghost and a HERO, this one is hard to put down!" ~ Debbies' Bookbag Reviews

Get it while it's hot at Amazon:
Playing with Fire

I would love to read this book!!!
thank you for the giveaway!!