BB&R stands for Black Beans and Rice, which is redundant, since a Risotto is rice. But, as a wise woman once said, "Whatever." 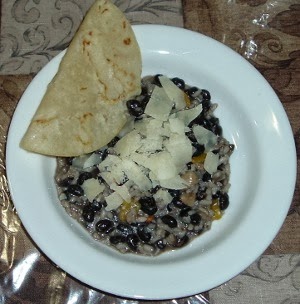 For this, I heated some garlic-flavored olive oil in a sauce pan. I diced some onion and tri-colored peppers and cooked them along with some cumin for a few minutes. Then I put in the arborio rice and stirred that around until the rice started to go translucent. I had four times as much water as rice, and added some of the water, stirring it and cooking at a simmer until most of the water was absorbed. Then I added more water, cooked, more water, cooked, until almost all the water was gone. Then I added the drained black beans and a cube of vegetarian bouillon and cooked until there was just some sauce, not watery water.

I topped it with shaved cheese. The thing on the side is a soft flour tortilla warmed in a hot skillet.