Is everybody else singing "Hakuna Frittata" now? I know I am.

Frittata and Omelet
Add a bit of milk to egg and beat till mixed. Meanwhile, melt butter in a skillet.

And that's where the two roads diverge.

For an omelet, you pour the egg/milk mixture into the pan and cook until the bottom is set and the top is soft-cooked. Meanwhile, saute the veg until as done as you like. Spread veg and cheese over half the omelet and fold other half over. Slide it out of the pan. 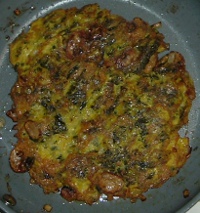 For frittata, cook the veg first, then stir that and the cheese into the egg/milk mixture and put it all into the hot buttered pan at once. Cook slowly until set. I slide it out and flip it back into the pan so it browns on both sides.

You can put more stuff into frittata without people looking at you weird. You can even put leftover pasta in.

This was very, very delicious, by the way, being made with fresh asparagus and onion from our garden, and with fresh egg from our #2 daughter's hens.

I'm participating in Story A Day May for the first time this year over at my daily blog. Hop over and see what I've been writing!