Do you eat beets? A lot of people either haven't tried them, or don't like them. 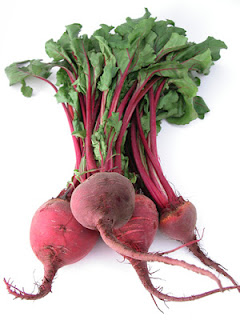 Beets were known as beet root for years when people ate the green, top part of the plant as a salad, but didn't eat the root. The root was prized by physicians for its healing qualities but considered unappetizing to eat.

Beet roots have been used since the time of the early Greeks and Romans. It was said that the goddess Aphrodite ate beets to retain her youthful beauty. They have been used for ailments from dandruff to obstructions of the liver.

In modern times, scientists have found that the lowly beet root contains many B-vitamins, calcium and iron. American and British researchers have found that beets or beet juice can help with high blood pressure. Recently, it has been tested for use in reducing and eliminating tumors.

What a great little root, huh?

Another interesting aspect of the beet is how it has changed shape since it was used in those early times. The beets we eat today are very round. They have been 'engineered' to be more attractive. Beets from a thousand years ago were shaped a lot like carrots!

I like to eat beets. It's difficult to find them locally (outside Charlotte, NC). You have to look around. You cook them very much as you would potatoes. Be sure to wash thoroughly before cooking. Cut the green top off and boil until tender. Don't peel until after they have cooked and cooled to reduce the amount of beet juice lost in the pan (And on your hands!).

Once they have cooked and cooled, I peel them and cut them into thin slices. I like them warm, with a little butter, but my favorite recipe is the one below.

In a bowl (use glass, beets will stain plastic) add vinegar, onion and cloves. Add sliced beets and stir. Let sit for at least 30 minutes before serving for the beets to absorb the flavoring. Serve cold.

With all the healthy properties of beets, maybe you should give them a try!

My husband and next-door grandson LOVE pickled beets, but I don't. I think beets smell and taste like dirt. EXCEPT, I've found I love fresh beets from the farmer's market and I love borscht!

I've never had borscht, Marian. I'll have to try that.

I love beets too, but I never boil them. I cut them in wedges and steam them for about 15 minutes,and then peel them. If you boil them you loose too many nutrients. I also grow them in my organic garden, and when they're young, I pick off the beet greens. They make a tasty addition to salads.