An easy dish for holiday brunch!

I accidentally found this easy holiday brunch dish. It was the morning of the brunch and I found that the dish I was going to make wasn't going to work. I didn't have time to go to the store, so I had to think of what I could do with what I had.

So I made the Bisquick recipe for biscuits that's on the side of the package. The recipe said it makes nine biscuits. I mixed that up and put it on the bottom of a baking pan, after spraying it with vegetable oil.

I put this into the oven and let it bake for about ten minutes on 350 degrees until it began to get firm.

While it was baking, I took eight eggs and beat them together in a bowl. When I took out the biscuit mixture, I poured the eggs in on top of it and put the whole thing back into the oven.

While that was baking, I shredded some Monterey Jack and sharp cheddar cheese, about two cups.

I took the egg and biscuit dough out of the oven after it had baked for another ten minutes.

The eggs were baking UNDER the biscuit crust. I didn't like that, so I took a spatula and broke the crust open. Egg ran everywhere in the pan. I put the cheese on top of that mixture and put it back into the oven for another 12 minutes.

By that time, everything had worked together to make a beautiful golden-brown top crust and the eggs had created a layer for tthemselves. 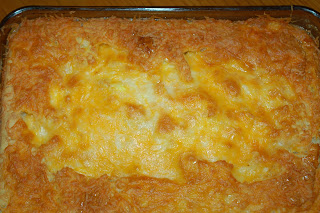 I let it cool for a few minutes then sliced the whole pan into squares. They stayed together well enough for kids to pick them up and eat them with their fingers. Everyone enjoyed the egg and cheese Bisquick brunch dish!

I was glad I found it because I'll use it again sometime - maybe even plan for it!

Great save! Sounds yummy, too.

That does sound lovely! Looks good, too. :)