We dearly love raisin bread, but I seldom get any. Why? I don't know, that's why.

Anyway, I got some. And I decided to make French Toast with it. Wasn't that a good idea? Indeed it was!

I usually add vanilla and cinnamon to my egg/milk mixture, but the raisin bread already had cinnamon in it, and I used vanilla almond milk instead of bovine mammary secretions, so I didn't need those ingredients. I just mixed egg and milk, dipped the bread on both sides, and fried in vegan margarine. 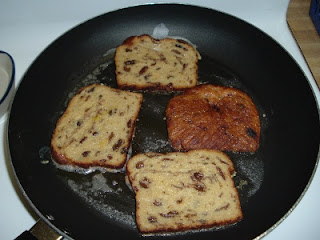 Personally, I thought it was sweet enough as it was, and just topped mine with slices of banana. Charlie Sweet-tooth topped his with maple syrup. AND banana. 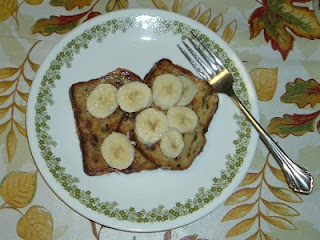 Two sticky thumbs up for a delicious breakfast!