My son, Christopher Lavene, is a pizza chef. He's been making pizza since he was small - starting with Chef Boyardee pizzas. When he was a teenager, he started making gourmet pizzas at home for us.

Eventually, he went to work for various pizza restaurants. After a brief stint working for Microsoft (he's also a genius with computers), he decided that life wasn't for him and went back to his passion - making pizza.

Now he's the pizza chef for the Pizza and Beyond restaurants. His motto is that eating good pizza makes people happy and he loves making people happy with his pizza. 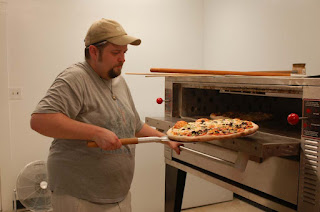 As a pizza chef, he experiments with different types of pizzas. He's made everything from black bean pizza to spicy chicken pizza and various types of dessert pizza.

Chris insists that it doesn't matter so much what you put on the TOP of a pizza. At the core of any good pizza is the crust.

His secret for perfect crust every time? "It's the flour. Pizza crust needs a high protein, wheat flour to rise up and stay firm. Most people make pizza crust with the same kind of flour they use for cakes. The flour should be more like bread flour."

Who can argue with success? 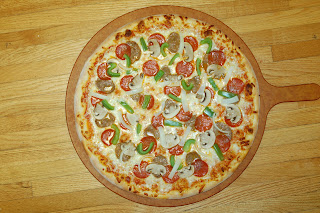 http://pizzaandbeyond.blogspot.com
Posted by Unknown at 6:47 AM