People think zombies are going to take over the world. I have something even more startling - giant veggies!

That's right. Spuds that weigh hundreds of pounds (imagine the French fries!), cabbages that are larger than a man and tomatoes that rival those from Attack of the Killer Tomatoes (not that I saw that movie but I heard about it from a friend).

Imagine if these veggies ever became aware of what was going on - that they were about to be shredded, diced, chopped, fried and boiled. They probably wouldn't take it lying down!

I have a link that will take you to a page where you can see these enormous veggies for yourself:

I also have real-life evidence. I took this picture of a farmer holding a huge sweet potato that weighed in at almost 20 pounds! 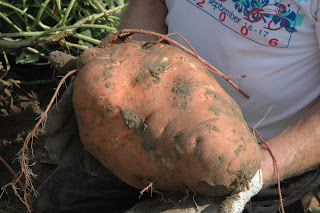 And this wasn't fully grown!

You scoff and say you'd just eat it, right? Let's talk about that.

How would you cook something that big? And then how would you eat it - especially if it didn't want you to?

It would take a lot of butter and gravy at Thanksgiving to eat that bad boy!

What makes veggies grow so big?

A word of advice: Never grow a veggie BIGGER than yourself. It might just eat you instead!

Yikes! Maybe Peter the pumpkin eater really DID put his wife in a pumpkin shell!

Looking at some of those giant pumpkins, I'd say it's possible! Wonder how you clean something like that out? Yuck!