What da heck is quinoa? How do you even pronounce it? You say KEEN-wah. It's so good to say when your irritated. Say it with a fake British accent, very high-pitched and shrill on the first syllable and deep and growly on the second. Say it with me: KEEEN-wahhh. Doesn't that do you good?

Here is what Vegetarians in Paradise have to say about quinoa. Briefly, it's a seed that's eaten like a grain, native to Boliva and Peru and that general neighborhood. I've gotten onto it in the past couple of years. It's pretty good, and it's way cool to cook because it goes from seedy to really pretty. Most of it turns translucent, but it has a white rim.

Here's a picture of how I usually cook it. I wash it and toast it and add water and veg boullion and some onions and sweet peppers and turn it down and cover it and steam it for about 20 minutes. 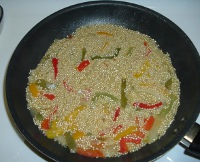 Quinoa is supposed to be highly nutritious, but I eat it because I like the taste and texture and looks of it. I also like to say it. If I get tired of saying "quinoa", I remember that Vegetarians in Paradise say, "Eight to nine thousand years ago, Bolivian natives living in the Lake Titicaca area began to cultivate quinoa." If saying, "The quinoa of Lake Titicaca" doesn't make you laugh, you need to up your medication.

O, Maid Marian, you are such a free spirit. Maybe I shall be you, when I grow up. :) Or after I have quinoa al fresco at Lake Titicaca.....