Bodie Parkhurst has a new book coming out, just in time for Mother's Day. It's called BENCHMARKS: A SINGLE MOTHER'S ILLUSTRATED JOURNAL, and it is gorgeous! It's also touching and heartwarming and heartbreaking and funny and grand.

But today, Bodie has agreed to share with us her secret recipe for her world-famous (as soon as I publish this post) Krusteaz Crumb Cake. 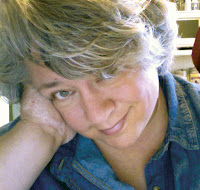 Most Saturdays I don't cook. Come to that, most Sundays through Fridays I don't cook, either, which is both sad and strange, because as a Sweet Young Thing I loved cooking. But then I hit the Romantic Years, and spent them mostly trying to find my way to men's hearts by way of their stomachs. By the time that particular process had run its natural course my love of cooking had taken a sharp left hook to the jaw and collapsed to the mat.

And that's pretty much where it has remained, except for the odd moments where it has drifted up into a state approximating consciousness. This never happens at convenient or predicable times. Take, for example, last Saturday.

There was little or no reason to try to cook. The Boy was off at a track meet far, far away. I had been putting off grocery shopping for a month, and supplies were at historic lows. I wasn't hungry. I actually wanted to be writing on one of several book projects, or designing baby stuff for my CafePress store, or even just lying on the couch watching a horror flick.

It was not the day for cooking. And so of course this was precisely the day that my Love of Cooking would sit up, shake its head, gingerly massage its swollen jaw, and ask brightly, "So, what're we doing today?"

So there I am, peering into empty cupboards and drawers, muttering to myself, checking expired "sell by" dates, and sniffing suspiciously. In the end, this is what I came up with.  And by golly, it was good. It was so good, in fact, that my son said, "There's no way you made this from scratch, Mom. It tastes too good. It had to come out of a box."

"I did, too, make it from scratch!" I shot back, insulted. "It's not out of a box. It's out of two boxes and a plastic tub!" Which it is. Here are the instructions:

1. Take one Krusteaz Crumb Cake mix and mix the batter according to the instructions.
2. Look in your "weird stuff" drawer and discover a box of butterscotch pudding mix from 2008 hiding at the back. (I really don't know if the expired status of the pudding mix makes a difference. I'm including it, just in case.) Pull it out, realize there is no milk, and pour it into the Krusteaz mix batter instead. Discover that now the batter is approximately the texture of clay.
3. Consider adding sour cream. Check the refrigerator and discover the sour cream is all gone except for one tablespoon in the bottom of the container, which has sprouted a rich and verdant crop of mold. Shudder, close the container, and shove it to the back of the refrigerator. (This is called Dealing With It Later, or Cleaning the Refrigerator in our house.)
4. Look at the cake batter again, pour far too much oil into a cake pan, and half-heartedly spread half of the batter (which now has many of the tensile qualities of asphalt) into the oil.
5. Realize that this just isn't going to work, and run some more water into the batter remaining in the bowl. How much water is anybody's guess. Just stick the bowl under the faucet and turn the water on and keep stirring until it looks more like cake batter.
6. Consider scraping the too-thick batter in the pan back into the now-thinner batter. Decide it's just not worth the trouble.
7. Go back to the refrigerator and stand with the door open while you consider your options. Shove the sour cream container a little further out of sight behind the expired bottle of pickles.
8. Discover a small tub of caramel apple dip from last Halloween lurking in the crisper drawer under a petrified orange.
9. Take a spoon and add dollops of caramel dip to the top of the batter in the pan. You'll have to scrape it off with your finger, so there's the added benefit of getting to lick the caramel off your finger between globs.
10. Take the crumb topping from the Krusteaz mix and sprinkle half of it over the thick batter and the caramel globs.
11. Realize you've really got a mess here.
12. Drop the remaining batter on top of the thick batter, the caramel globs, and the crumb topping.
13. Drop on more caramel globs, since it's hopeless anyway.
14. Sprinkle on the rest of the crumb topping from the Krusteaz mix. Your crumb cake should now look like a cross between a garden badly rototilled too soon after a rainstorm and a gravel road.

15. Put the mess into the oven and bake it for fifteen minutes more than the Krusteaz box recommends. (It'll still feel raw, but probably it's all that caramel).
16. Take it out and eat it hot and slathered with butter, if you don't care about your arteries, hips, waist, or heart.
17. Listen in surprise as the House Leroy raves, and your son refuses to believe that you actually made this, from scratch, or scratch-ish.
18. Know in your heart that the secret to this recipe is that there is no such thing as too much caramel.

So there you have it, folks. You heard it here, first. 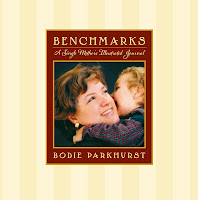 Bodie is also an artist, and it's her beautiful artwork that graces BENCHMARKS. She also has a line of CafePress products so adorable it makes me want to have a baby. My doctor says that, if I manage it, I should put a candle in the window because, "the last time anything like that happened, three wise men came from the East."

Bodie will be visiting my blog tomorrow with another recipe.

Sherry, this is killer-funny. Can't stop laughing! When is the book coming out?

Oopsie. Sherry, I mean: when is your COOKBOOK coming out? The one with this recipe (and all its cousins). Looking forward to reading BENCHMARKS!

The cookbook still has to be written. My existing cookbook is only funny in its "Weights and Measures," and "Substitutions" sections. Trust me, the new cookbook will have lots of recipes just like this one, including my "Death by Chocolate" cake (named by my ex-boss' wife) which evolved in very much the same way. Thanks for visiting, Susan!

Hilarious! Some of the best kitchen creations are born from desperation.

I am very happy the microwave was invented. Need I say more!

Hahaha. Too funny! Good luck on the tour - sell lots! Now we'll see if I can get through your dreadful captcha code. Argh!