I went hunting morel mushrooms yesterday. It's early in the season here, but we've had such a mild winter, I thought I might get lucky.

I found three. Three mushrooms, and not giant ones, either.

What's a cook to do?

I'll tell you what I did: I plucked the greens off a volunteer green onion and I made egg fu yung. 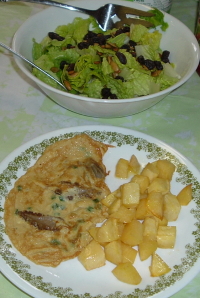 If using fresh-picked morel mushrooms, cut them in half and soak them in salted water. Remove and dry.

Heat sesame oil in skillet. Arrange mushrooms into two portions in skillet. Pour half the egg mixture over each portion. Cook until the egg is set, then flip and cook until done. (Takes about five minutes, more or less.)

I also made roast rutabaga (recipe on my blog tomorrow) and a salad of Romaine lettuce, toasted pumpkin seeds and raisins.

As a girl, I always wanted to learn to identify mushrooms, because I thought it would be neat and maybe useful for living in a cabin the woods while on the lam from an evil queen (What? Like you didn't have an evil queen after you when you a kid!). Unfortunately, I never liked mushrooms until well into college, and then only cooked. So mushroom-hunting has joined the list of things that I'll have to get someone else to do. Maybe I'll delegate to the dwarves.

My mind is spinning out a plot for a short story involving three guests and three mushrooms. One of the mushrooms is, of course, poison. But did the the guest it was intended for actually eat it?

Juturna, when I was a kid, I wanted to BE the evil queen! lol

I was taken mushroom hunting when I was very, very young. I wasn't allowed to pick any, just point them out. I've loved mushrooms ever since, but I only went that once, so I didn't hunt mushrooms until we moved to the country and somebody taught me how to find and identify morels.

Bev, I like the way your mind works. I spin mushroom stories every spring, but I'm always in the woods with my hands full and I never write them down. ~grin~