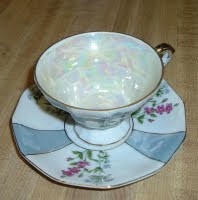 I go to my mother's nearly every day, where we share a book or a television show or a movie, a treat and a mug of tea. In the summer, we sometimes have egg cream instead, but winter is definitely tea time.

We have our tea out of very pretty mugs but neither of us like tea or coffee out of those thick "diner" mugs. You know the kind I mean--you have to jack your jaws open just to get your lips around the rim.

So we got to talking about the other end of the spectrum: china cups. She said the best cup of coffee she ever had was served in a china cup. I told her that I had heard people say tea is better out of china cups.

You know me, or you should by now. I looked it up.

China began in--duh--China, but bone China began in England, with Josiah Spode in the 1700s. Well, it really began with Thomas Frye in the mid 1700s, but he used animal bones and bits, but Spode left out the bits. Bone china, I regret to tell my vegetarian friends, is 50% bone ash. Ick.

This article is illustrated with a china cup of mine, but it isn't bone china, because it isn't translucent. It's some kinda China, though. Not bone. It isn't bone.

However, if you were a porcelain manufacturer with a body to get rid of.... I'm just sayin'.

Speaking of mysteries, mystery author Geraldine Evans is guesting at my site today, posting about making video book trailers. Come join us there! Only if you want to, of course.

I wish I was your neighbor, Marian. Not because we'd kill people and use their bones to make china, but because I'd like to drink tea with you and your mom.