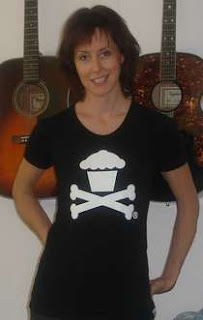 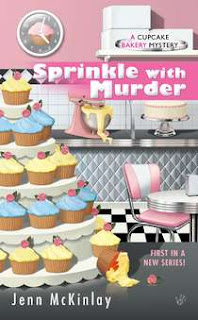 Jenn: What is it about food that lends itself to wackiness? A reviewer recently described my Cupcake Bakery Series as very Lucy and Ethel, which I took to be a great compliment since I Love Lucy is one of my favorite shows of all time.
The decoupage mystery series and the upcoming library lover's mystery series share the same type of irreverent humor as the cupcake bakery series, but frosting gets flung in the cupcake series and you just don't see that over the top type of humor in the other two.
Gayle: If you couldn't write cozy mysteries, what genre would you choose?
Jenn: Well, I used to write romantic comedies, so I've been there and bought the t-shirt. I love writing mysteries, but if I was kicked to the curb tomorrow, I would probablywrite young adult adventure stories. I have two young sons and we've been having a ball reading the classics (Willy Wonka and the Chocolate Factory) as well asthe newer sensations (The Shadows: The Books Of Elsewhere). It seems the place you can take the greatest risks as a novelist is in young adult literature. Children are much more open minded, I think.
Gayle: Great observation! What writer(s) inspired you to become a writer yourself?
Jenn: Lucy Maude Montgomery and Louisa May Alcott. I read all of their works when I was eleven years old and knew then that I would be a writer someday.
Gayle: How do you feel writing one of your series under a pen name helps or hinders you?

Jenn: It helps by giving you a new identity in that you can break away from your other series and draw new readers, while it hurts because if readers like your work, they may not find you under another name. It's a mixed bag, for sure.
Gayle: Do you have a favorite recipe to share with us?

Jenn: Absolutely! This is my favorite cupcake recipe from the series. Melanie Cooper, my heroine in the cupcake bakery series, will occassionally get insomnia. This is called Moonlight Madness and its her go-to cupcake for nights that she can't sleep (mine, too)!

Vanilla Buttercream Frosting
Ingredients:
1 cup butter, softened
1 tspn vanilla extract
4 cups confectioner's sugar
2-3 tbspns milk, or whipping cream
Directions:
In a large bowl, cream butter and vanilla. Gradually add sugar, one cup at a time, beating well on medium speed. Scrape sides of bowl often. Add milk and beat at medium speed until light and fluffy. For best results, keep icing in refrigerator when not in use. This icing can be stored up to 2 weeks. Rewhip before using.
Makes 3 cups of icing.
To finish the Moonlight Madness Cupcakes, spread a generous amount of the vanilla buttercream frosting on top of the cupcake with a rubber spatula, then roll the top of
the cupcake in a bowl of shredded coconut before the frosting dries so the coconut
will adhere to the frosting. Top with an unwrapped Hersey’s Kiss.
Gayle: That sounds delicious!
Jenn: Thanks for having me visit! It's been a pleasure!
Posted by Gayle at 6:27 AM

Jenn, I love food mysteries (no surprise!) and I love cupcakes. My #3 daughter had cupcakes on tiers instead of a wedding cake.

I think you're absolutely right about young adult fiction being great to read and write. Only Jasper Fforde, as far as I know, is as free-wheeling as the best YA writers.

A cupcake recipe that made 18 would kill me. Got any that makes one or two?

I only wish cupcakes had been an option when I got married but I'd have gone nuts trying to pick flavors! LOL. I don't have a recipe for one or two, but I did find a cool cookbook for microwave mug cakes that I'm going to try. I'll let you know!

Jenn,
The t-shirt is so cute! You have a great theme to play with. I bet you have lots of fun with it.