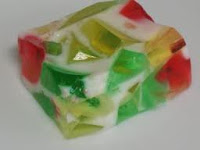 I was watching Julie and Julia last night for the second or third time, which I’m sure you know, Dear Reader, is about a young woman who sets herself the task of cooking every one of the over 500 recipes in Julia Child’s The Art of French Cooking over the space of one year. Julia Child’s cookbook was written shortly after World War II in order to teach French-style scratch cooking to Americans. Now, my grandmothers were both quite expert at American-style scratch cooking, which is what I write about in my books. My mother was no slouch at scratch cooking herself. But when I was growing up in the 1950s and 60s, scratch cooking was considered oh-so-old-fashioned. The modern Mid-Twentieth Century American Housewife was encouraged by all the smartest lady’s magazines (and food companies) to utilize the latest time-saving canned and packaged foods to save herself needless hours in the kitchen, presumably so she could put on her shirtwaist dress and pearls and meet her man at the door with a dry martini and a delicious meal on the table when he came home from work.
Since my poor young suburban ‘50s mother wanted nothing more than to be hp to the times, that’s the kind of food I was raised on. I’m such a health-foodie now that I shudder to remember what we grew up eating. But that doesn’t mean it wasn’t delicious.
How I occasionally long for a nice side-dish of Uncle Ben’s instant white rice mixed with a can of undiluted Campbell’s cream of celery soup to go along with my Hamburger Helper goulash. My aunt was particularly fond of magazine recipes, especially for cake. Ever had a mayonnaise cake? How about Coca-Cola cake? I think the savvy cook from my youth could create an entire month’s-worth of meals and hardly repeat herself just by keeping a few basic ingredients in her pantry for mixing and seasoning:
Canned cream-style soup, Lipton’s Onion Soup mix, crackers, American cheese slices and a chunk of Cheddar, a bag of noodles, instant rice, Jello, Kool-Whip, packaged cake mix.
One of my mother’s specialties was Ambrosia. Drain a can of fruit cocktail (you know - those little chunks of peach and pear, tiny green grapes, and the odd unnaturally red cherry) and dump it into a tup of Kool-Whip. Mix it up nice, maybe with some packaged shredded coconut, and scarf it down. We loved it, and she made it for us practically until the day she died. I wouldn’t be surprised if my sibs still make it. Admit it, you guys.
There are so many things you can do with Jello that I don’t have the time to go into them all, so I’ll just hit the Mid-Century highlights. Emerald salad - that green stuff made with lime jello, cottage cheese, mayonnaise, maybe some finely grated cucumber. Broken glass pie, made with two or three bright colors of Jello, set and cut into jagged pieces, mixed with Kool-Whip (or heavy whipped cream, or unflavored gelatin mixed with a can of evaporated milk for a firmer consistency), pour into a pre-made graham cracker crust and chill. How about an orange Jello salad filled with grated carrot and served with a glop of mayo? Lemon Jello with crushed pineapple and little marshmallows.
One of our party staples in the 1960s was lime punch. Just dump a quart of lime sherbet in a punch bowl and pour quarts of ginger ale or 7-Up over it. Our tuna casserole was made with noodles, a can of peas, a couple cans of tuna, and a can of cream of mushroom soup. Speaking of parties, when I was old enough to throw my own, I went through a stage of making tiny cheese balls out of grated cheddar mixed with cream cheese and rolled in crushed Doritos.
And now if you’ll excuse me, I think I’ll go rummage around and see if I can find an old box of Jello in the back of the cabinet.
Posted by Donis Casey at 1:34 AM