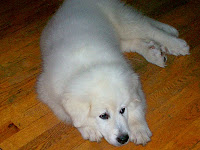 You'll recall a few weeks ago I wrote about the newest member of the Trent family. I hadn't planned on writing much more about Cooper. I didn't want to bore you with how cute he is, or how much he's growing, or etcetera ad nauseum.
However.... I'm beginning to realize what a great dog John Grogan had in Marley. You remember Marley? The worst dog ever?
Things we have recently discovered about Cooper:
He's something of a Fatal Foodie himself. We came home from Home Depot the other day to find a cereal box half hidden under a shelf. Granted, I'd been giving him the treats for "sitting" and "staying;" and my husband suggested he was rewarding himself for doing those things while we were gone.
That does not, however, explain the cookies. I'd taken freshly baked cookies out of the oven and pushed them to the back of the counter where I thought they'd be out of Cooper's reach. When I returned from taking a shower, I learned that Cooper had knocked down the pan of cookies and had eaten them. "It's not that bad, Mom," my son said. "I'd already eaten most of them."
The phone cord is a tasty snack and a way to get someone's attention if he or she is focused on talking to someone over the phone rather than playing with you.
We have learned that if Cooper does not get to go play in the park late every afternoon, he will likely have a big "accident" on the floor while my husband is in the shower the next morning. This makes me think he holds my husband personally responsible for not taking him to the park, because the rest of us are still sleeping at that time.

Most recently, Cooper has learned he does not fit in the window sill with the cat. He found that out himself last night when he jumped onto the couch and tried to squeeze into the window. My husband and son had to extricate him.

The worst part? When you get frustrated with him, he gives you the look; and you hug him and think, "It's been so long since I've baby-proofed a house. What am I forgetting?"

What am I forgetting? Any thoughts?

Since dogs get destructive when they are lonely or bored, I've read that leaving a television on when you're gone can help. Maybe Cooper would enjoy Animal Planet!

SO much to think of!

Thanks for your suggestions! I knew you guys would have some good ones. :)