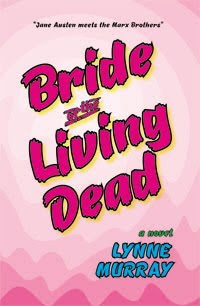 My guest today is Lynne Murray, author of the fabulously titled Bride of the Living Dead:

Indie film critic, Daria MacClellan, wants to marry the man she loves, but she's slipping on rose petals as if they were banana peels on her way to the altar. Big, beautiful and rebellious, Daria, who is most comfortable in a monster movie poster T-shirt and blue jeans, finds that her wedding is hijacked by family drama. How did she sign on for a formal wedding planned by Sky, her perfectionist, anorexic, older sister? Daria adores her fiancé and she loves horror films, but her wedding seems to be spiraling downward in that direction. Will a picture perfect pink wedding turn her into the Bride of the Living Dead?

Take it away, Lynne!

In my new book BRIDE OF THE LIVING DEAD, I have my mid-twenty-something heroine, Daria, taking cooking tips from her future mother-in-law. In my life, learning to cook came even later when I was in my 30s, but nesting was also part of the equation. Having a willing man in residence to experiment on made all the difference.

Both my parents worked throughout my childhood. I now realize that my mother felt the ghosts of pie-from-scratch-making housewives from her Midwestern childhood looking over her shoulder when she turned on the stove. She never set out to teach me any of the skills she felt she herself had never really mastered. Most of our meals involved boxes and cans. Campbell’s soup with saltine crackers is still a comfort food for me.

When we had company my mother had a few special recipes that did involve cans and packets. She also had a secret weapon but I’ll talk about that in a minute.

By the time Charlie and I got together, I was 32 and I knew how to scramble eggs, oven broil a steak and bake a potato but everything else I cooked came out of a can or package with instructions on the side to follow.

Charlie didn’t know how to cook either and we made a deal that when one cooked the other would clean up. I was interested in learning to cook and also avoiding cleaning up. He had no problem washing dishes and no interest in learning to cook.

I already owned one cookbook LET’S COOK IT RIGHT by Adelle Davis, a gift from my health food freak grandmother on my father’s side.

The main thing I got from Davis was a regrettable tendency to make blender drinks featuring nutritional yeast for breakfast, a habit not appreciated by Charlie. As a hint, he bought me a waffle iron at a garage sale. The first time I tried it, it blew out all the electrical circuits in the apartment before I could even pour the batter. It got put outside next to the trash to avoid a second attempt.

I started getting cookbooks from the library, usually the less scary ones such as CHEF TELL TELLS ALL by the German Chef, who was at that point on broadcast television, and whom I just learned from Wikipedia was the inspiration for the Muppets’ Swedish Chef or THE ALICE’S RESTAURANT COOKBOOK.

I learned a lot watching Charlie’s friend Keith’s wife, Peggy. I sat in awe watching her make Fettuccini Alfredo or Pesto, neither of which I had ever tasted before. Everything she cooked was like a religious experience, it was so good. Even though she was following a cookbook and explained what she was doing, watching her make it seemed like one of those magic acts, where you don’t know how the bouquet of flower got into the top hat.

Watching Peggy put together an impromptu picnic lunch with cheese, bread, wine and fresh figs, like an artist selecting colors, I started to get some ideas of how it could work. I filed away lessons that were never spoken such as “do not use the exact same ingredients in both the salad and the stew.”

Eventually I found a battered copy of Irma Rombauer and Marion Rombauer Becker’s THE JOY OF COOKING. It served as a basic reference for nearly twenty years until it fell apart and I had to buy another copy. Ironically, I had read Alex Comfort’s THE JOY OF SEX long before encountering the cookbook that inspired the title.

One of the last times I spoke on the phone with my mother before she died, I called to get her recipe for spaghetti and meatballs because my friend was bringing her boyfriend and his nine-year-old son for dinner. My mother’s recipe was simple enough, the only thing to chop was onions and green peppers, everything else came from cans, even the mushrooms. But what I mostly remember was how thrilled she was that I was lucky enough to have a young child over to visit.

“You should make sure there are some toys or other activities for the child to do, so he knows that you thought of him and you’re glad he’s there,” she suggested. Her love for children was such that she was more impressed by this than some people would have been by a visit from the Queen of England.

My mother did very well at entertaining without being a particularly remarkable cook because her secret weapon was empathy and a genuine liking for people. Some things you can’t get out of a can.

Lynne Murray, author of the romantic comedy, Bride of the Living Dead, has ha

d six mysteries published. Larger Than Death, the first book featuring Josephine Fuller, sleuth of size who doesn't apologize won the Distinguished Achievement Award from NAAFA (the National Association to Advance Fat Acceptance). She has written three ebooks of encouragement for writers as well as essays, interviews and reviews on subjects that rouse her passions, many of those can be found under "Rants and Raves" on her web site at http://www.lmurray.com. Lynne lives in San Francisco and when not writing she enjoys reading, watching DVD film directors' commentaries and spoiling her cats, all of whom are rescued or formerly feral felines.

Bride of the Living Dead http://www.pearlsong.com/brideofthelivingdead.htm