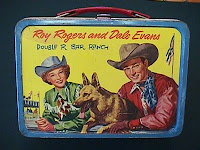 There was a feature in my local paper not long ago about a company that provides gourmet brown bag lunches for their customers to take to work. The fare they offer includes things like beautiful fruit salads, hearty soups with crusty bread, sandwiches on baguettes or buttery croissants. It all sounds quite wonderful. Brown bagging wasn’t quite like that when I did it. For several years, I would pack myself a lunch of nothing more than a banana and a couple of rice crackers.
When I was a schoolgirl, my mother sent our lunches with us every day. Not in a brown bag, though. We carried metal lunch boxes with pictures on them. I’ve tried to remember what my lunch box had on it, but for the life of me I cannot. I was in elementary school in the pre-Star Wars/Scooby-Doo/Happy Days/Barbie era. I’m guessing mine was something like Mighty Mouse or Dale Evans and her horse Buttermilk.
I remember the particular aroma that arose when you opened those boxes--a combination of warm bread, bologna, and apple. We ate a lot of bologna sandwiches. I was always happy when we got olive loaf or pb&j. No rye or whole wheat bread for us. Wonder Bread built strong bodies twelve ways. Sometimes Mama would put in a cookie or a hard-boiled egg. Or a banana, which would be pretty soft and speckled by lunch time in those air conditioning-less days.
The lunch box had a thermos that fit into a special holder to keep it from rolling around and squashing your sandwich. Some kids’ moms put chocolate milk or lemonade in theirs, but we always got plain whole milk. That was okay with me. Chocolate milk with a bologna sandwich is just wrong.
My mom took her lunch to school in an actual pail when she was a girl. I asked her once what her mother made for her, and she said she often had biscuits and ham or a piece of cold chicken. But her most common lunch was a bean sandwich. Smash those cooked beans into a paste, spread them between two pieces of bread, add a little slivered onion, and now you’re talking.
Posted by Donis Casey at 1:34 AM

And don't forget that bright overtone aroma of metal in the days when lunchboxes were made of tin or zinc or whatever the heck it was.

I can't remember what picture was on my lunchbox, either--isn't that odd? But I do remember that smell of sweaty food and metal.