The End Is Near

... but let’s not wax too philosophical here. I’ll just mention that I’ve almost finished the rewrite of my latest manuscript, and expect to have it off to my editor in a week or two. The books in this particular series always end with a recipe section in the back, which entails several weeks of recipe testing for me while the book is being written.

I haven’t really been able to do that in the same personal way with this book. That’s because I focus more on the men in this story, so there is a lot of hunting and campfire cooking, butchering, and putting up meat. In fact, this is a particularly meaty book. The story takes place in November, which is traditionally hunting and butchering time, the end of the season, time to get ready for winter.

Since I live in a place that has what seems to me reverse seasons, I’m coming to the end of growing time in real life, as well. Spring is definitely over. The minute June began, the temperature shot up like a bottle rocket. Each day is a losing struggle to keep the garden alive as long as possible. I go out in the morning around ten and cover the tomato plants with a shade cloth to keep the ripening tomatoes from cooking on the vine. Many of the fruits near the tops of the vines are sunburned anyway. The squashes faint every afternoon like delicate Southern ladies. Many of the vines are burning. They won’t be able to last much longer no matter how much shade and water they get, not unless the temperature abates considerably. Which it won’t. It’s June, the end of the season, time to get ready for summer.

I did have a fun squash crop this year. Don planted zucchini and acorn squash, but we’ve had three volunteer squash vines come up and thrive. It was exciting waiting to see what they were going to turn out to be. Much to our enjoyment we ended up with some beautiful Delicata (the striped one), and a great collection of spaghetti squash (the big one). The third volunteer has several squashes on it, but I still don’t know what they are. They look a bit like streaky cucumbers. They have to be something we ate and composted, but I can’t imagine what. When we finally figure it out, I’ll let you know. 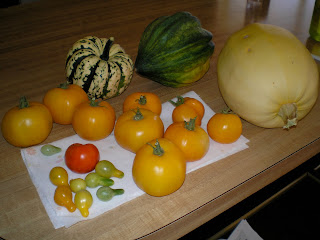