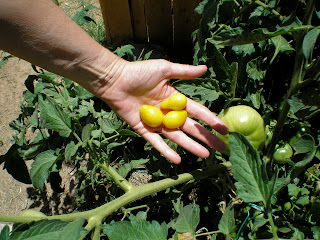 It finally reached 100 degrees here yesterday.  The temp has been flirting with 100 for a while now,and in fact it’s cooler again today, if you consider 95 cooler.  This has been a very cool spring for us in southern Arizona.  By this time, we’ve usually had a several days that have topped the century mark. But if there is one thing you can count on in the Sonoran Desert, death and taxes not withstanding, it is that the hot weather will come as sure as the sun will rise, and it’ll stay around until autumn.

I bring this up because our cool spring has given us the best tomato crop we’ve had since we moved here nearly twenty-five years ago.  We planted three heirloom tomato plants back in February, all yellow varieties, and they are beginning to ripen.  I’m now able to get four or five of the grape variety off the vine every day. In a few days, it’ll be dozens. Believe it or not, the end of February can be too late to plant tomatoes here, for if a really hot spell strikes in the spring* and you’re not prepared with shade cloths, you could end up with burned fruit.  Even if you are prepared, and shade and water your plants religiously, days on end of super-hot weather makes for a tomato with hide like an African elephant.

It’s already too hot for the radishes and lettuces, and many of the herbs have bolted.  I have some good sized bell peppers and cabbages, acorn and spaghetti squashes as big as my fist.  We’ve been getting zucchini for a couple of weeks.

So the tomato race is on. Will the fruit be able to ripen on the vine before the weather gets too hot, or am I doomed to pick as much as I can and cover my kitchen cabinets and window sills with green tomatoes?  One of the great memories of my youth is of my mother’s kitchen with all flat surfaces invisible beneath tomatoes of every hue and at every stage of ripeness, redolent with the sunny smell of summer.

By the way, when tomatoes were first introduced in Europe, there was a rumor that they were poisonous, so they were not much eaten.  I wonder if you could kill someone by feeding him a food he thought was poisonous and letting his subconscious do the rest? Mystery writers are always thinking these kinds of thoughts.

*Which it often does.  In March of 1986, the first year I set up a merchant booth at the Phoenix Highland Games, the temp reached 104 and melted several of our audio tapes.

I'll come and visit you in May, Donis and you can visit me in September, and we will eat tomatoes.

Around here, the tomato race is trying to see if you can get a ripe one by the Fourth of July. We've made it, a time or two!

In OK, the tomatoes usually ripen from the middle of June on. It's interesting how one can follow the tomatoes ripening through the summer north to south, from the Gulf of Mexico to the Arctic Circle.