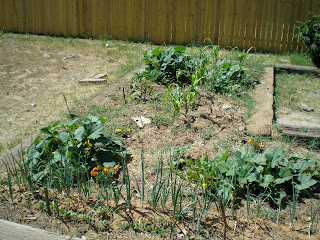 After seeing the picture of Vicki's garden, I have to write something about seasonal foods.  The picture at left of one of the deep bed gardens in my back yard in Tempe, Arizona, was taken two days ago.  There's quite a noticeable difference between the growing seasons in Canada and the Sonoran Desert.  I put my garden in late in February.  By the first of May, my acorn squash is covered in blossoms, the corn is knee-high, the onions are edible, radishes are on their second or third pla 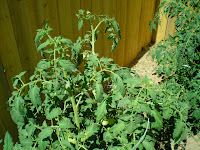 nting.
It's not as easy to grow tomatoes here as it is in most other parts of the country, but I've got some very nice plants this year.  I set them out in February, too, and now the bushes are chest high and covered with green fruit.  The trick out here is to put plants in the ground early enough that they can ripen before it gets so hot that the tomatoes are all burned up. I have a six-inch layer of mulch over all my garden beds to help hold in the water and cool the soil, and soon even that won't be enough. In just a couple of weeks, I'll be rigging shade over the sunnier parts of the garden, and watering my potted herbs twice a day.
The difference in when and where things can be grown was impressed upon me recently when I was reading a book on macrobiotic diets.  One piece of advice that was given in the book was that one should "avoid tropical fruits, since they are not native grown foods."  Oh, really?  Depends on where you live, don't you think?
For me, seasonal and locally grown foods include oranges, grapefruits, and lemons in the winter and spring, dates, nopal, and prickly pear in the summer and fall.
Posted by Donis Casey at 1:40 AM