I'm not talking about chi-chi World Cuisine with two lumps and a string of grass on a plate the size of Texas. I'm talking about "ethnic" restaurants that remember what ethnic food means--the food of a people--and incorporate where they are into where they originated.

It tickles me to see a menu in a Chinese restaurant that includes hot dogs (usually only in the children's section). Some people dislike that, saying that it shields kids from having to try new things.

In my short story "Blossom on the Water", Bud Blossom is a Chinese-American wh 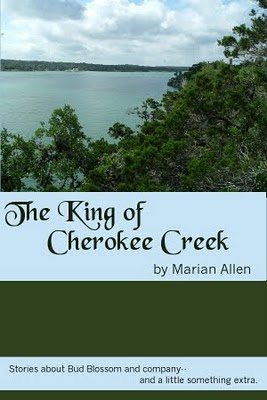 o has a houseboat/restaurant in a small Midwestern town. The restaurant is called The Golden Lotus, but it includes catfish sandwiches along with Chinese dishes. His restaurant is always packed, in spite of his personality.

If I may segue into some blatant self-promotion, I've collected the stories I wrote about Bud and some of his customers/employees into an e-book called THE KING OF CHEROKEE CREEK. It's available on Amazon for Kindle (text-to-speech enabled) and on Smashwords in various formats, including ones that make it readable on or printable from a just plain computer.

sounds like a neat idea, making a collection around an occupation - and food. neat idea~!

Kids are kids - I wouldn't eat fat on meat - and still won't. You can't change a kid's mind so what's wrong with "Chinese hot dogs?"

Restaurants have to offer "kid food" to get the parents in the doors. With any luck, kids will try stuff from their parents' plates.

With my oldest daughter, we've learned that she'll eat "watered down" ethnic food.
Mexican is kind of easy to do with kids. Cheese quesadillas are sort of like a Mexican grilled cheese. Plus, kids love the basket of chips. I've gotten my daughter plain steamed rice at a Chinese restaurant, and she really liked it. At Italian places we usually do noodles with butter and cheese for the kids.