The Corn is High 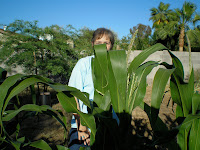 I hope you all will bear with me for one more entry about my garden.  My excuse for not dropping this topic is that I haven't had such a lush veggie garden in many, many years, and I suppose I just can't get over it.  I can only guess that the unusually cool May helped, as well as the fact that I left the plot fallow for a couple of seasons and mulched like it was going out of style.  Whatever the reason, let us look at it as research for my books.  My character, Alafair, raises a huge garden every year, and in every book I write, I dedicate some of the action to her activities in the garden.
The book I'm writing on right now is set in November.  She's bringing in the last of the pumpkins, storing the nuts and apples, squashes and potatoes in the root cellar and the attic, and preparing the garden for winter. When my grandparents retired from the farm 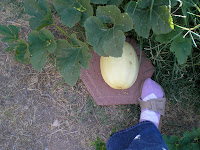 and moved into town, they still plowed up their entire back yard and raised their own vegetables until they grew too old and frail.  Gardening was no hobby for their generation.  It was a matter of going hungry or not.
When I write about what it was like to grow your own, I want to show what the earth and greenery smelled like, what the dirt felt like in the gardener's hands, how she could tell just what a plant needed by the way it looked, and when it was ready to pick.  How she knew when and where to put each plant into the ground, and what companion plants were best to grow near it.  I can look all that stuff up.  But there is nothing like experiencing it for yourself to be able to write it from the bone.
The top picture is the corn crop, which is beginning to tassel. As you can see, since I am actually from Oklahoma, I make sure that I always grow the corn as high as my eye, if not an elephant's eye. Maybe I can at least manage to grow it as high as one of those miniature elephants that lived on an island off the coast of Alaska until a couple of thousand years ago.  The lower picture is my amazing spaghetti squash.  I stuck my foot in the picture so you could see the size of the thing, Dear Reader.  And yes, I know I'm wearing sandals with socks, but it is my own back yard and no one could see me.
I can't promise that I won't say another word about the garden this season, but I promise that from here on out, I'll try to restrain myself.
Posted by Donis Casey at 12:47 AM

Don't restrain yourself! I love reading about the garden, and nothing says "fatal foodie" quite so well as mystery writers talking about how they "mulched" and "fertilized" the garden and now the plants are doing beautifully. Put in plenty of ... er ... bone meal, did you, dear?

I love hearing about your garden. Whiat fascinates me is how the different seasons, visa vie where you live and I do, affect the crops and the planting.