Butternut Squash and Eggnog to the Rescue 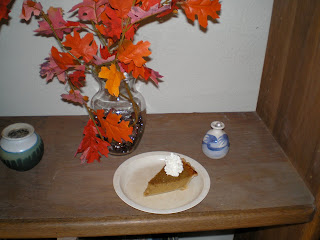 I hope you all had as lovely and delicious a Thanksgiving as Don and I did.  We enjoyed our usual vegetarian TG a deux. The menu was slightly different this year because of Don’s new anti-oxalate diet, and yet I discovered that almost all of the traditional Thanksgiving fare was doable.

We made a Quorn ‘turkey’ roast, which if you’ve ever attempted to replace actual turkey with a meat substitute, Quorn roast is by far the closest reproduction.  Don did the dressing, cornbread, of course.  This was the biggest cheat dish of all, since he’s supposed to avoid celery.  What would dressing be without celery, though?  So he saved up his oxalate ‘points’ just for the occasion.

I made my yummy, cream-cheese sauced, sharp cheddar and buttery bread crumb covered, absolutely not low-cal  broccoli-onion casserole, the recipe for which I posted last week.  I ate as much of it as I wanted, saying to myself all the while, it’s Thanksgiving, after all.  Same with the butter-slathered dinner rolls.

The biggest problem of all was pie.  Neither pumpkin nor sweet potatoes are on Don’s diet, and he had already squandered all his dietary good will on the dressing.  Now, I could have made some other kind of pie than ‘pumpkin’, and it would have been lovely, but I rose to the challenge and created a pie of my own recipe that was as delicious as any pumpkin or sweet potato pie ever made.  I used butternut squash.

I substituted pureed butternut squash in a traditional pumpkin pie recipe, but the secret to extra deliciousness was that I also substituted eggnog for the evaporated milk.  Since store-bought eggnog is already sweetened, I halved the sugar.  My recipe for pumpkin pie calls for 1/2 cup of granulated sugar and 1/2 cup of packed light brown sugar.  I used only the brown sugar.

So next time you’re looking for a different and interesting holiday pie, I recommend taking your favorite pumpkin pie recipe and altering it to make Donis’s Butternut Squash-Eggnog Pie.

Before the holiday season is over, and prepared eggnog is no longer available, I intend to try an eggnog custard pie.  I’ll let you know.

I'm recovering from a cold with relatively little appetite and your recipe for butternut squash pie STILL made me drool...