I am all that about noodles. So, now that I've learned how easy they are to make, I make 'em. I got the recipe from The Woks of Life, a super site for Chinese cooking! Actually, this is a half-recipe, because it makes a TON of really thin noodles.

The closer to exact your flour and water measurements are, the better. Mix the flour and salt. A little at a time, mix in the water until it's all in. Put that dough on a floured board and knead it FOR FIFTEEN (15) MINUTES, adding flour until the dough is smooth and not sticky to the touch. Cover the dough with a bowl and let it rest for 30 minutes.

Roll it out paper-thin, as thin as you can roll it.

Cut it into strips much smaller than you think you need to, because the noodles expand as they cook.

The thinner they are, the less time they need to cook in boiling liquid (soup or salted water). Nice thin ones only need 3-4 minutes of boiling. 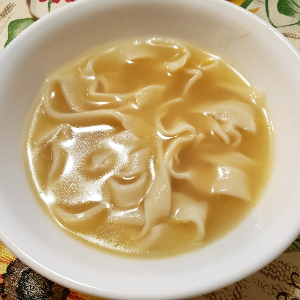 I'm posting on my blog today about dumplings I made using this noodle recipe, and I cut the scraps from the dumplings into, well, scrappy noodles, and made a mushroom noodle soup. As my grandpa would have said, "Messy, but nourishin'." He would also have said, "That don't hurt the eatin' of it." 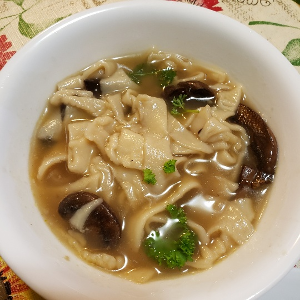 The green stuff is parsley.

I'm the only one in my family who likes tofu, so I don't get to have it very often. ~weeps~

I indulged myself a couple of weeks ago, which means, since I've slept since then, I don't remember exactly what this glaze was made of. 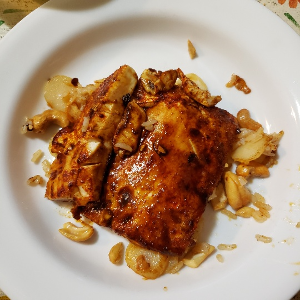 From the color, I'd say it was Hoisin sauce with a little soy sauce, maybe some minced ginger and onion? I do remember I sliced it and pressed liquid out of it. Then I heated my beloved iron skillet with enough sesame oil to cover the bottom. I arranged the tofu in there, not crowded, and brushed the tops with the glaze. The heat? Probably just below medium. It probably took about 7-10 minutes to brown on the bottom. Then I flipped the pieces and glazed the browned side, continuing to cook for another 7-10 minutes.

When the tofu was done, I took it out, put some more oil in (just a blip), and cooked the leftover rice with water chestnuts and cashews.

I was in heaven! Charlie ate it, but he wasn't thrilled.

I'm posting todayat my own blog about the Okonomiyaki  I made the other day which did get a good review.

So easy, so quick, so good. 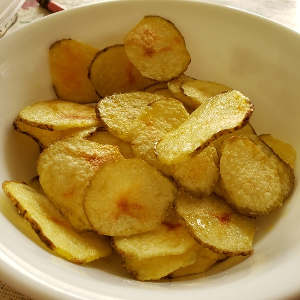 Slice a potato super-thin. Smear oil on a microwave-safe plate. Spread the slices on the plate. Sprinkle with salt and/or spices. Microwave in increments of 1 minute, checking to make sure they aren't overcooking, for around five minutes. When they start to brown, they're done. They crisp up as they cool.

The thinner you slice them, of course, the less time they take to cook, so watch out!

I'm posting today at my own blog about my home-made bao. Yes, she made fresh bao!

It was my turn to bring the treats to church this Sunday. When I walked in the kitchen door, my friends said, "Oh, no!" I said, "Ya'll, that is not what you want to hear when you walk into a room." The problem was, three other people had brought treats for one reason or another, so we had an embarrassment of riches.

I brought my raggedy old fruit salad home, and Charlie and I had it for supper, with Bear Whippin' Sauce over it.


What is Bear Whippin' Sauce? It's equal parts mayonnaise (in this case, vegan "mayonnaise") and brown sugar. It got its name in our family when I told a wee one I was making "berry dipping sauce" and she misheard me.

I'm posting at my own blog today about a casserole made almost entirely of tag ends and leftovers.

We had a couple of younguns we hadn't met before come to visit. We asked their mother what she suggested we feed them, and she said peanut butter and jelly. So I did this: 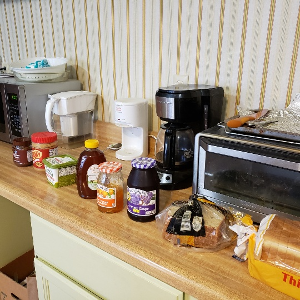 I'm posting today on my own blog about a fish dish.

Our renters moved out for a happy reason, and left a couple of things behind in the freezer. Waste not, want not: OF COURSE we ate it!

One of the things was a partial bag of Chinese pork pot stickers, which are a kind of dumpling. Ish.

They also left some rice, so that wasn't going to go begging.

I stir-fried some mushrooms, slivered almonds, bok choi, and water chestnuts, made some sauce with veg broth and cornstarch, and BOOM! 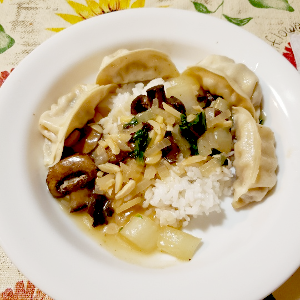 I'm posting today on my own blog about handmade Chinese noodles, which I made. By hand.

We had some leftover peas and some steamed cauliflower that was about to go to Jesus, so I warmed them up together in spaghetti sauce with a dollop of vegan margarine in it. I served it over fresh Jasmine rice, which I buy by the 10-pound sack. 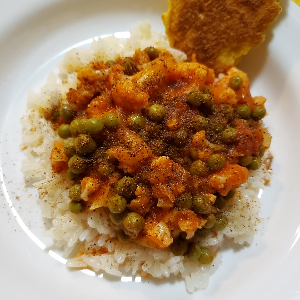 Charlie doesn't like spices, so I doped mine with garam masala powder at the table. Would have been better cooked in, but it is what it is.

That yellow-brown thing on the edge is a corncake, made by Charlie, and very good it was, too.

I'm posting at my own blog about an iron-skillet potato dish I actually made according to a recipe.